Who pays for Hurricane Irma and Harvey damages? 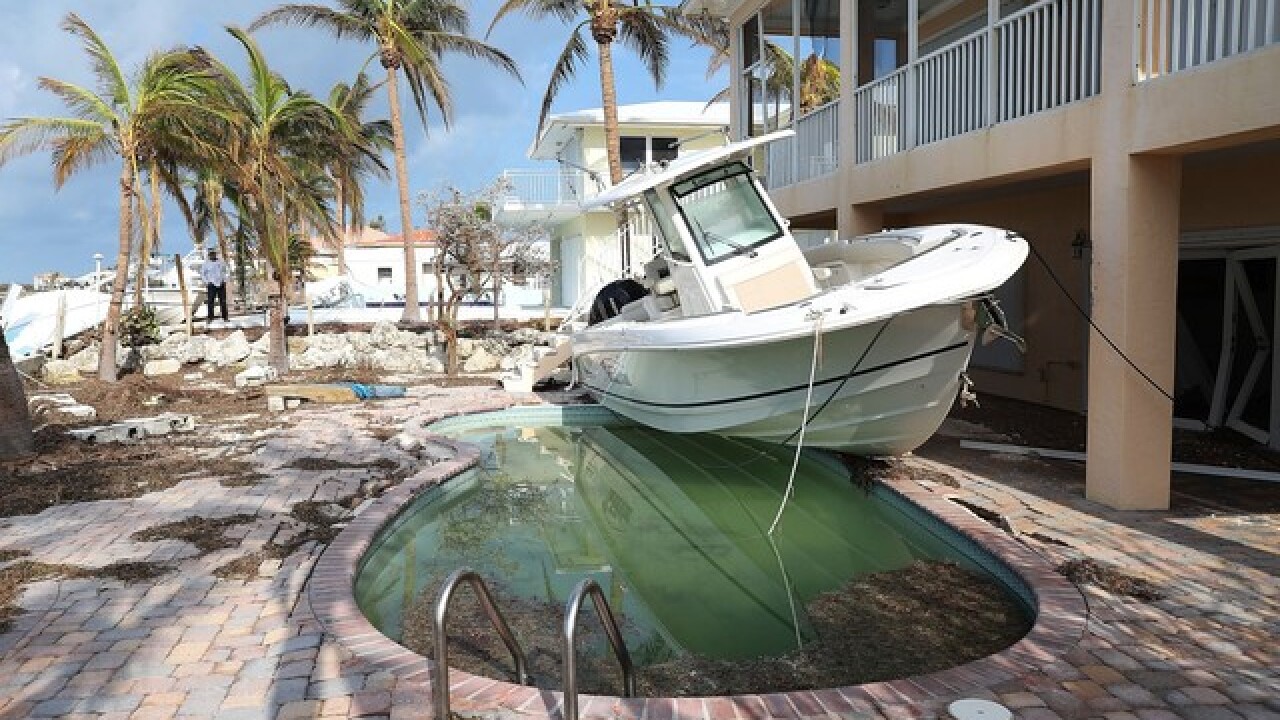 Who will pick up the tab in Florida, Georgia and Texas? That's the big question, now that flood waters from Hurricanes Irma and Harvey have receded. Left behind is damage that Moody's Analytics expects will exceed $150 billion, on par with the cost of Hurricane Katrina. After any major natural disaster, a patchwork of public and private actors step up to cover costs. Payouts from insurers, along with a miscellany of local, state and federal aid programs, will help those affected to pay for rebuilding. Still, not everyone will be made whole again. "Individuals will have to use some of their own resources, too," said Shahid Hamid, a professor of finance at Florida International University's College of Business. "Those who can afford it." Here's a look at who's footing the bill.

Amount paid out to date: $204 million The National Flood Insurance Program, part of FEMA, is often the only form of flood insurance available to homeowners. Flooding typically isn't covered under standard home insurance policies. The program had made more than $204 million in flood insurance payments for Harvey as of Thursday. It anticipates payments could reach $11 billion for that storm alone. The agency is just beginning to sort through claims related to Irma, and doesn't have a dollar figure for Irma flood payouts yet. Worth noting: these policies have a cap. Homeowners who are enrolled are covered up to $250,000 in damages on the structure of their home and up to $100,000 on damages to its contents. Even so, not everyone has coverage. "In Florida, only 18 percent of homeowners are insured for flood [damage], which is not covered by regular insurance policies," Hamid said. "That's a problem."

Amount paid out to date: Unknown Private homeowner insurance policies usually kick in when it comes to a storm's wind damage. Irma's winds are what caused most of the damage in Florida, said Loretta Worters, spokeswoman for the Insurance Information Institute. "95 percent of people do buy homeowners insurance throughout the country ... so most people are likely have coverage from wind," Worters said. AIR Worldwide, a catastrophe modeling firm, estimates that insured losses in the U.S. from Hurricane Irma will range from $25 to $35 billion. For Hurricane Harvey, analysts estimate that insured losses will be just above $10 billion. "If you have a structure which is damaged by both wind and [storm] surge, then you should get some coverage from both a private insurer and the NFIP," said Jean-Paul Pinelli, a professor of civil engineering and construction management at the Florida Institute of Technology. One note: There are two public groups in Florida and Texas that act like private insurers for high-risk homeowners who can't get coverage elsewhere. They'll bear some of the cost burden, too. In Florida, that unit is the Citizens Property Insurance Corporation. A similar government entity—the Texas Windstorm Insurance Association—is set up to insure high-risk regions of Texas.

Amount paid out to date: $15.6 billion If people don't have insurance, or if an individual policy doesn't cover any or all damage, then the federal government may step in with personal grants and loans. FEMA provides assistance to those who lose their homes as part of a declared disaster and don't have coverage. It also has a program to provide temporary financial relief to displaced individuals and families. That assistance can be used to fund everything from rent for temporary housing to clean-up items like a dehumidifier to disaster-related medical expenses. As of Thursday, FEMA had received roughly 734,500 applications for assistance related to Harvey and had distributed $376 million. For Irma, the agency had received about 154,800 applications for assistance and had approved $21 million. Thousands of applications continue to come in daily, a FEMA spokeswoman said. The Small Business Administration, meanwhile, offers low-interest disaster loans to eligible businesses and homeowners. By Thursday, the agency had approved $172 million in loans for Hurricane Harvey. It hadn't approved any loans yet for Hurricane Irma. The federal government can also provide large-scale assistance. Congress has already authorized $15 billion in disaster aid for Texas in the wake of Hurricane Harvey. Lawmakers are still weighing aid packages for Florida and Georgia to help cope with Irma. States can pitch in, too—though they usually focus on joblessness and repairing infrastructure. For example, Texas offers Disaster Unemployment Assistance to people who get laid off because of a storm.

Adding It All Up

Moody's said that it expects that total economic activity linked to rebuilding will compensate for any short-term economic losses. That means the economy, as a whole, will be okay. But that doesn't mean individuals won't lose money. People typically decide not to file for small claims valued at less than their insurance deductibles, Hamid said. Those assets may still be worth thousands of dollars, though. For example, Hamid—who lives in Miami-Dade County—says he probably won't file an insurance claim for his home, even though his fence is down. It's easier for him to pay to fix it himself. "There are going to be a lot of small claims," Hamid said. "Those will be borne by homeowners." Written by Julia Horowitz for CNN. The-CNN-Wire ™ & © 2017 Cable News Network, Inc., a Time Warner Company. All rights reserved.