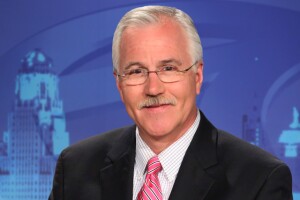 Senior Meteorologist Mike Randall has been with WKBW-TV since August 1983. Mike is an AP and UPI award-winning feature reporter. Prior to coming to WKBW-TV, Mike worked as a Co-Host of “PM Magazine” at WFSB-TV in Hartford, Connecticut and at WDBJ-TV in Roanoke, Virginia.

A native of Western New York, Mike is also a professional actor. He has performed a variety of roles in theatres locally and around the country and he continues to perform his critically acclaimed solo shows of Mark Twain Live! and Charles Dickens Presents: A Christmas Carol.

An avid supporter of the Variety Club of Buffalo, you can see Mike each year on The Variety Club Telethon for Children’s Hospital. You may also catch Mike making appearances all year round at fashion shows, auctions, and fund-raisers for numerous charitable organizations across Western New York.

Mike received his Certificate In Broadcast Meteorology from Mississippi State University. He has earned the Seal Of Approval from The American Meteorological Society as well as the National Weather Association. A career highlight for Mike was filling in on ABC's “Good Morning America”.

Mike and his wife, Kathy, have three sons and live in North Boston.