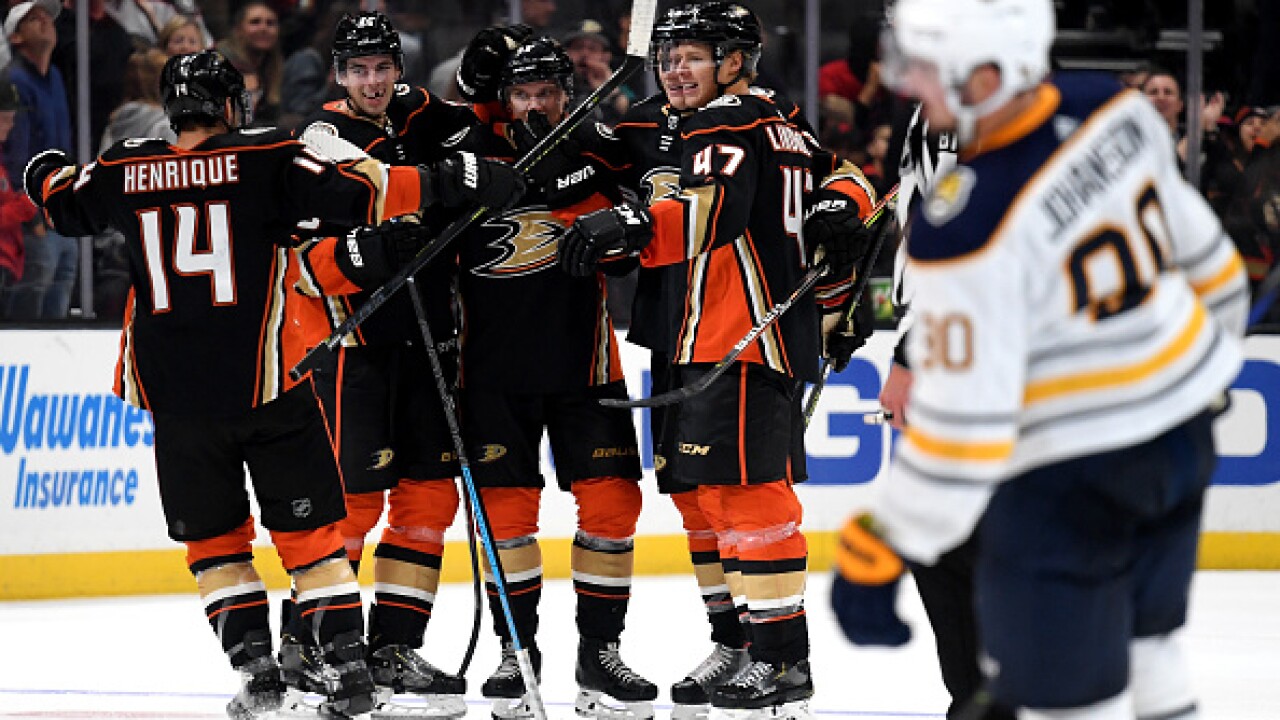 Harry How/Getty Images
ANAHEIM, CALIFORNIA - OCTOBER 16: Jakob Silfverberg #33 of the Anaheim Ducks celebrates his empty net goal with his teammates, to tkae a 5-2 lead over the Buffalo Sabres, during the third period in a 5-2 Ducks win at Honda Center on October 16, 2019 in Anaheim, California. (Photo by Harry How/Getty Images)

Rickard Rakell had a goal and an assist for Anaheim, and Ryan Getzlaf scored the Ducks' first power-play goal of the season. Josh Manson added two assists and John Gibson made 31 saves.

Henrique got the Ducks on the board with 1:20 remaining in the first period when he redirected Manson's shot past Linus Ullmark. He then got his third goal in the past two games with 13 seconds left in the second, making it 4-2 when he converted a feed into the slot from Max Comtois.

Silfverberg added an empty-net goal late in the third period to put it out of reach.

Victor Olofsson scored his team-leading sixth power-play goal for the Sabres, who absorbed their first regulation loss after a 5-0-1 start. Jack Eichel also scored for Buffalo, and Ullmark stopped 26 shots.

Buffalo entered with the league's best power play with nine goals in 21 opportunities, but was 1 for 7 with the man advantage.

Eichel opened the scoring at 7:35 when he cut to the net and beat Gibson on his glove side. Eichel stole the puck from Manson near the Buffalo blue line, skated up the wing and then made a nifty move in front of the net for his seventh goal of the season.

Olofsson made it 2-0 nine minutes later when he took Sam Reinhart's pass and buried a wrist shot midway through Buffalo's power play. His first eight goals have come with the man advantage, which is an NHL record.

Rakell tied it at 2 less than a minute into the second after a centering pass from Silfverberg, who forced a turnover deep in the Buffalo zone. Getzlaf then gave the Ducks the lead at 9:14 when he fired a one-timer after a cross-ice pass by Sam Steel. It was Anaheim's first power-play goal in 18 opportunities, ending its second-longest drought to start a season.

NOTES: Sabres LW Jeff Skinner got the 200th assist of his 10-year career with the second assist on Olofsson's goal. ... Eichel has three goals and nine points in nine games against the Ducks along with a four-game point streak.

Sabres: Make the 30-mile trip north on I-5 to face the Los Angeles Kings on Thursday.

Ducks: Continue their three-game homestand on Friday against Carolina.

Copyright 2019 The Associated Press. All rights reserved. This material may not be published, broadcast, rewritten or redistributed.