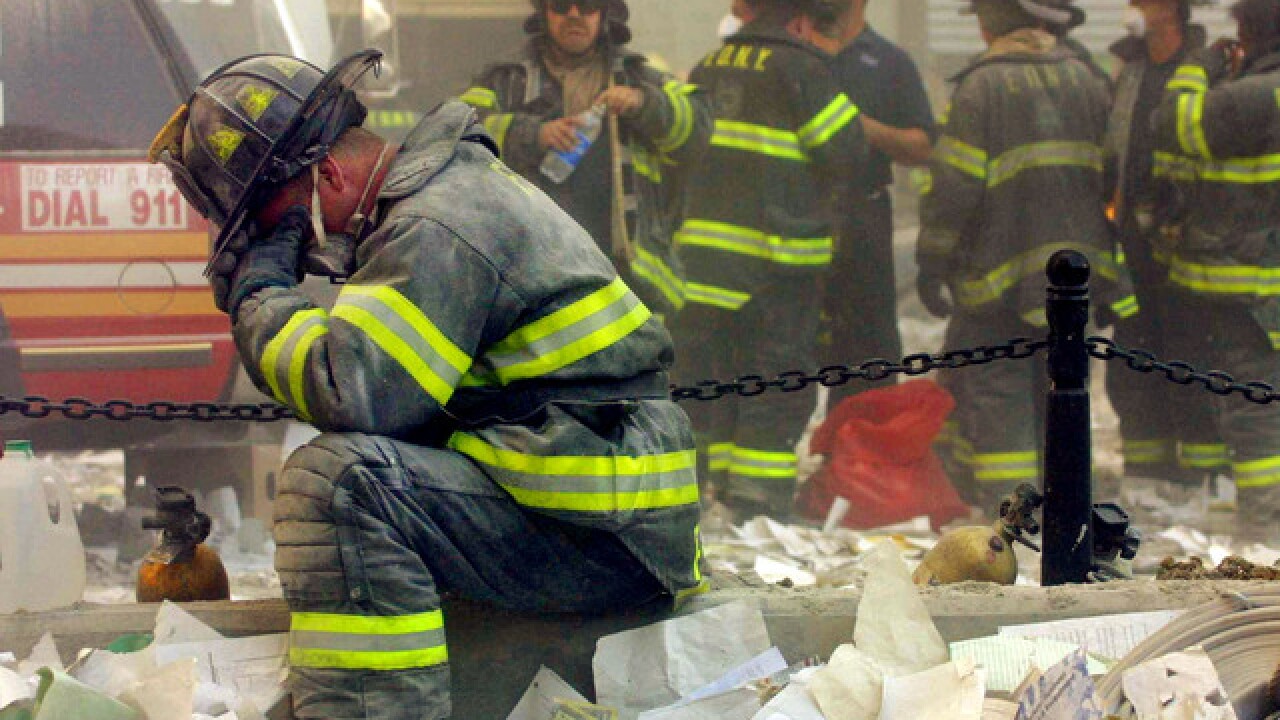 It’s been a decade and a half since 19 terrorists took the lives of nearly 3,000 people in New York, Washington, D.C. and Pennsylvania. Following the horrific attacks on September 11, 2001, President George W. Bush spoke to a grieving nation.

“America has stood down enemies before, and we will do so this time. None of us will ever forget this day. Yet, we go forward to defend freedom and all that is good and just in our world,” he said.

So, how is America doing in keeping Bush’s promise? Should Americans really feel safer from terror today than they did on that September evening in 2001?

The world has changed a lot in the last 15 years, and the world of terrorism is no different. Al-Qaida — the group of Islamic militants responsible for 9/11 — has taken a back seat to the Islamic State group, otherwise known as ISIS or ISIL. While al-Qaida used military tactics to pull off highly sophisticated and precisely coordinated attacks — often with giant casualty numbers in highly secure locations — ISIS relies on small groups of heavily armed extremists to hit so-called “soft targets”: Nightclubs, concert halls or any other crowded venue with a low amount of security.

But while ISIS attacks may not match the scale of those carried by al-Qaida, ISIS has been able to use the internet and social media to spread their influence to a much wider audience. With one click of the mouse, ISIS can inspire Islamic extremists across the world to carry out an attack against innocent people wherever they are — a tactic used in both the Boston Marathon bombing in 2013 and the Pulse Nightclub shooting in June.

“Where the US has perhaps done poorly is in the area of countering violent extremism and crafting an effective counter-narrative that resonates with individuals who ultimately go on to support groups like al-Qaida and ISIS,” said Colin Clarke, a terrorism expert from the RAND Corporation.

According to Elena Pokalova, an associate professor at National Defense University in Washington, DC, the United States is currently losing the cyberwar with the Islamic State.

“We are losing on the front of counter-narrative, specifically with ISIS,” she said. “They have been very effective using social media and current day technologies to develop their narrative and recruiting people through internet.”

While American technology companies — specifically Twitter — have been able to ban accounts used by ISIS members for recruitment, Pokalova says the United States can be doing more. Instead of simply removing users — who can simply make a new account — she says that a more effective method would be to use social media to counter this call to terror with testimonies from defected ISIS members, Quran passages that call for peace or open a direct dialog to reason with potential terrorists.

“If you control these spaces, you have intelligence, you have new information, you can use that space to put out counter narratives,” she said.

But because the internet is a two-way street, does that mean it’s easier for counterterrorism organizations to track their enemy? Not necessarily, says Glen Duerr, an assistant professor of international studies at Cedarville University.

“We can imagine that it’s probably fairly easy to track (social media use) in a way. On the other hand, a lot of communication is done via code, or it’s done as a call to do something rather than systematically training someone,” he said.

While the United States still struggles in communicating with terrorists online, government agencies have improved internal communications. In the wake of 9/11, it was widely reported that government departments’ unwillingness to communicate allowed the terrorists to slip through the cracks. Spurred by a competition for government funding, departments like the FBI, the CIA and others worked against each other to catch terrorists rather than work together.

This newfound effort to share information, in conjunction with laws like the Patriot Act that gave the government unprecedented power to fight terror, has kept Americans from falling victim to another 9/11-like attack. But experts are in agreement: No amount of communication can ever keep Americans completely safe from terror.

While America has largely been able to protect national monuments, sports stadiums, airports and other major transportation hubs from attack, ISIS and ISIS-inspired terrorists tend to pick smaller venues with less security — like a holiday work party in San Bernardino, or a gay nightclub in Orlando — making it nearly impossible to predict and thwart attacks.

Would immigration reform make us safer?

According to some politicians on both sides of the aisle, stopping terrorism could be as easy as passing a few pieces of legislation — Immigration reform and/or gun control. But according to terror experts, new laws might not lead to significant changes.

Take immigration reform. According to Duerr, the United States vetting process for legal immigrants and Syrian refugees is one of the most rigorous in the world.

While refugee vetting does not apply to illegal immigrants, America has yet to see an attack on its soil from a terrorist that visited or was sent from the Islamic State. But Pokalova warns that while migrants may not have yet posed a threat to the United States, research shows that second or third generation migrants in Europe have been more likely to carry out attacks. She also adds that there’s no way to know for sure who exactly we’re letting into the country — that is, until we can develop mind-reading technology.

“I’ve heard that the vetting process in the United States is very rigorous.  I am not quite sure what that means,” Pokalova said. “You will never know the profile or an individual refugee is. How do you trace of a refugee comes into a country and they have been supporting the ideas of ISIS? Even if they have not been active fighters on behalf of ISIS, they might have been supportive of ideas or the ideology.”

When it comes to gun control, both Duerr and Pokalova are in agreement — preventing the sale of guns to those on the terror watch list is just about the only piece of legislation that would have an impact on the fight against terror. Even in the event of a blanket ban on assault weapons, terrorists would still likely be able to find a way to get their hands on guns.

“Even if you ban assault weapons, those weapons are still out there and it would be impossible for the government to collect all of them. So, I think subtle shifts would go a long way,” Duerr said.

Luckily, America finds itself at an advantage, being on the opposite side of the world of ISIS strongholds. While ISIS militants from Syria and Iraq only need to cross the Mediterranean Sea to find themselves in Western European countries like France and Belgium, it’s much harder to board a plane or boat to America.

In terms of fighting terrorism abroad, America’s philosophy has changed in the 15 years since declaring a global War on Terror. According to Pokalova, using conventional warfare to fight what is by definition unconventional warfare was not effective in campaigns in Afghanistan and Iraq during the 2000s.

“What seems to be working is less of the global war dynamic and more of these targeted operations and more clandestine operations,” she said

In 2013, President Barack Obama announced that the United States would no longer refer to the fight against terrorism as a war.

“We must define our effort not as a boundless 'Global War on Terror,' but rather as a series of persistent, targeted efforts to dismantle specific networks of violent extremists that threaten America," he said
.

So how does the United States crush an enemy that lives online just as much as it does in Iraq and Syria — especially when the country is technically not at war? According to Duerr, the method is two-pronged: Give support to those fighting ISIS on the ground in Iraq and Syria, and thwarting terror attacks before they happen on home soil.

In terms of the battle overseas, Duerr says the United States is on the right track by providing aid to the Iraqi army and conducting drone strikes against known ISIS strongholds. But he also thinks there is more that America could be doing to assist in the fight — like instituting a no-fly zone.

But when it comes to supporting forces on the ground, it’s often difficult for Americans to know who to support. When it comes to diplomatic relations in fractured countries like Iraq and Syria, “The enemy of my enemy is my friend” doesn’t always ring true.

“It’s impossible to know who are the good guys and who are the bad guys,” Duerr said. “We are actively engaged with the Kurds in Syria and Iraq. They have their own motivations, it’s what I think is, by the standards of the area, a reliable partner with whom we can work.”

“By sending ground forces, you are not confronting terrorist groups, you are confronting those who are willing to fight you in open battles,” Pokalova said.

According to Duerr, America has also learned to communicate with allies in the area to expose terrorist cells before they spread — but he also thinks there is plenty of work to be done.

So, for as far as America has come in the last 15 years, are its citizens really safer from terror? When it comes to another attack on the scale of 9/11, experts agree the risk is minimal.

“I don’t think the chances are zero, but I think it’s highly unlikely that a 9/11 style attack could be replicated in the United States,” Clarke said. “I’m not even sure ISIS would attempt to replicate the modus operandi of a 9/11 style attack in the US, but could very well seek to pull of some kind of WMD attack in a European capital.”

While it’s unlikely that ISIS would try and replicate 9/11, Duerr warns that the terror group has already pulled off a highly coordinated series of attacks.

“If you look at the Paris attacks in 2015 and you look at the Brussels attack a few months ago, they have the ability to coordinate multiple attacks by multiple terrorists across a significant swath of a city,” Duerr said. “ISIS certainly has the capability to coordinate something larger. The question is whether or not that they would be able to do so inside the United States. At least in the present, it looks like they’re less able than in say France or Belgium to coordinate a wider attack.”

ISIS may have the ability to strike at anywhere at any time, but considering the other threats to American safety day in and day out, a terror attack is no more than just a drop in the bucket of violence.