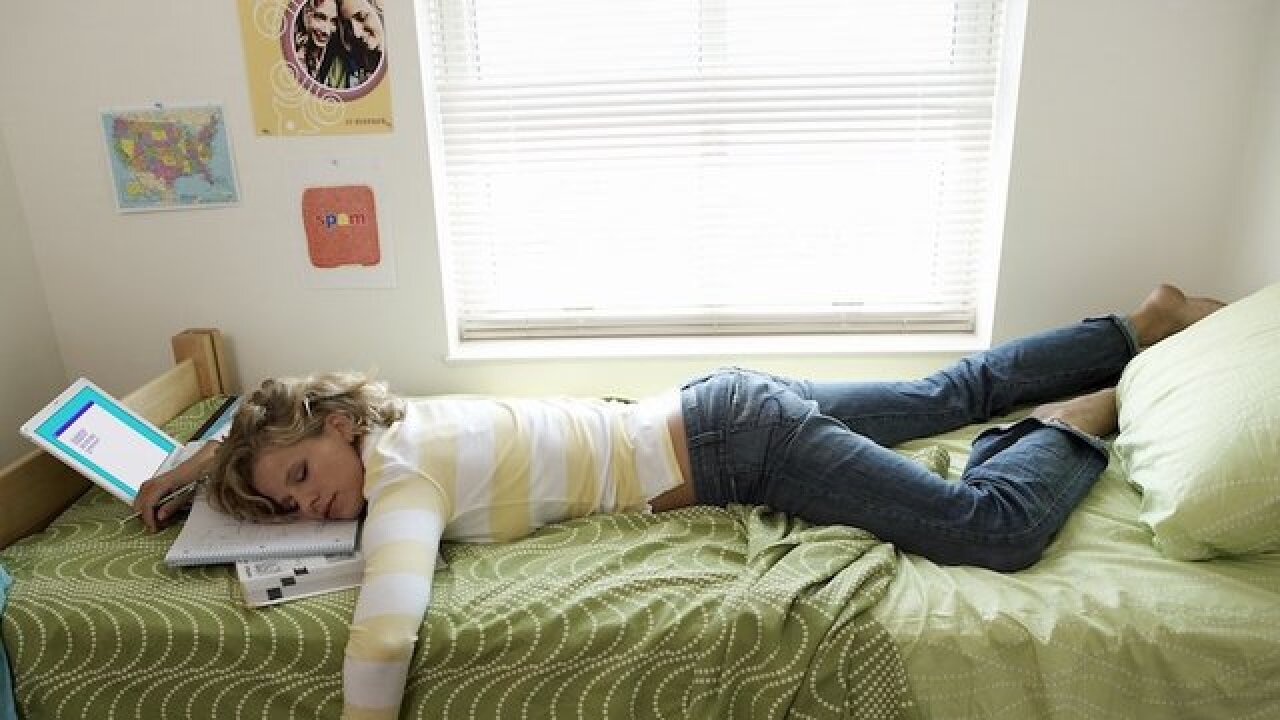 (CNN) — If you're a middle-aged adult with high blood pressure, type 2 diabetes or existing heart disease and you typically sleep less than six hours each night, you could be setting yourself up for cancer or an early death from heart disease.

That's the discomforting results of a study that sleep-tested 16,000 adults between the ages of 20 and 74 and then tracked their health for 20 years.

"This is now the fourth study, including ours, clearly indicating that sleeping less than six hours a day can actually lead to the development of artery disease and death related to cardiovascular disease," said renowned cardiologist Dr. Valentin Fuster, director of Mount Sinai Heart in New York City. Fuster was not involved in the study.

Sleep is critical to the body's rejuvenation. Deep sleep, the kind that comes only after a full cycle, is necessary for the body to release hormones designed to repair cells and build tissue in the body and brain.

The new study, published Wednesday in the Journal of the American Heart Association, found people with existing high blood pressure or type 2 diabetes who slept less than six hours were twice as likely to die from heart disease or stroke.

The study controlled for sleep apnea, smoking, mental health and other disease conditions, and excluded anyone over the age of 75. More than half of the study participants were women, and the median age was 47.

The new research also found an association with cancer. People who had existing heart disease or history of a stroke who got less than six hours of sleep had three times the increased risk of dying from cancer.

A lack of sleep can cause cancer? No, not at all, Fernandez-Mendoza said. It's the heart disease that is the risk factor, which a lack of sleep may make worse.

"We're not saying that short sleep was a cause of cancer," he clarified. "We know that people with heart disease are more likely to have immune problems and develop cancer. And we know that there is a tight link between sleep and the immune system -- sleep-deprived people have higher levels of inflammation.

"There is a lot of evidence showing that people in young adulthood or middle age who have risk factors for heart disease such as hypertension or even diabetes are at greater risk of ending up developing cancer down the road."

Hopefully, clinicians will begin to check patients for signs of short sleep duration to help identify people with heart disease who are at greater risk of ending up developing cancer and dying from it, he said.

The study also found that short sleepers with no risk factors for cardiovascular disease didn't appear to have an increased risk of developing and dying from cancer or developing heart disease or a stroke and dying from it, Fernandez-Mendoza said. But the study was observational and did not do extensive tests for underlying disease.

Other studies have not been as positive.

Research published in January measured the prevalence and rate of progression of subclinical vascular lesions, or early stages of the plaque that can block arteries, in 4,000 people with no history of heart disease. They also attached sleep monitors to each of those subjects to test their sleep over seven nights.

"We measured the amount of disease that was present in the arteries that supply blood to the brain, to the legs, to the main aorta and the coronary arteries," said Mount Sinai's Fuster, who was an author on the study.

The increase of plaque throughout your body puts you at increased risk for strokes, digestive problems and poor circulation that leads to numbness and pain in your extremities, as well as heart disease.

After factoring out traditional risk factors, "we found more disease was present if the number of hours of sleep was less than six hours, compared to those who slept six to eight hours," said Fuster, who is also the editor-in-chief of the Journal of the American College of Cardiology.

Subjects who slept fewer than six hours were 27% more likely to have atherosclerosis throughout the body than those who slept seven to eight hours.

"More than eight hours was a little bit detrimental too, so it seems there's a window of opportunity to be healthy," Fuster said.

The study also found people with "fractured" sleep, defined as moving or waking up during sleep phases, also had higher levels of early disease. Participants with fractured sleep were 34% more like to have plaque buildup than those who slept well

If you have existing heart disease, high blood pressure or type 2 diabetes and sleep poorly, both doctors recommend seeing a sleep specialist to determine the problem.

"The answer is not to give sleeping pills," Fuster said. "We have to be very smart in trying to understand why somebody is sleeping less and that will vary by the individual."

For example, many overweight people have sleep apnea, which can be corrected with oxygen masks worn at night. Others might have stress or anxiety that leads to insomnia, which could respond to cognitive behavior therapy and better sleep hygiene.

Still others may be drinking too much coffee or using alcohol to help them sleep. Using alcohol will cause you to wake up after a short time and when you sleep again, it's typically poor quality.

Working with a specialist can help identify your sleep issues and target them with appropriate interventions, Fuster said.

Even those of us without obvious risk factors need to take our sleep seriously to stay healthy. The good news is that you can train your brain to seek better sleep just as you train it to learn and accomplish other skills.

One of the first tasks is to set up your sleep environment and establish a relaxing bedtime routine. It's that repetition that will train your brain to recognize that its time to relax and sleep.

Start with the bedroom. Make sure your bed and pillows are comfortable and the room is cool: Between 60 and 67 degrees is best. Don't watch TV or work in your bedroom; you want your brain to think of the room as only for sleep.

Be sure to eliminate all bright lights, as even the blue light of cellphones or laptops can be disruptive. If that's hard to accomplish, think about using eye shades and blackout curtains to keep the room dark.

Try to eliminate disturbing sounds as well. Earplugs or white noise machines can be very helpful, but you can create your own with a humidifier or fan.

During the day, try to get good exposure to natural light, as that will help regulate your circadian rhythm.

Then, establish a bedtime routine you can follow each night. Taking a warm bath or shower, reading a book, listening to soothing music, meditating or doing light stretches are all good options.

Food and drink to avoid

We've already talked about alcohol. Other suggestions for good sleep include avoiding stimulants such as nicotine or coffee after midafternoon, especially if you have insomnia.

Also avoid rich, fatty foods just before sleep. If you have any digestive issues, eating fried or fatty foods, spicy meals, some citrus and even carbonated drinks can trigger heartburn and indigestion.

Exercise is key to promoting good sleep. According to the National Sleep Foundation, as little as 10 minutes a day of walking, biking or other aerobic exercise can "drastically improve nighttime sleep quality."

Follow all these steps, and you'll be well on your way to closing your sleep deficit and improving your health.