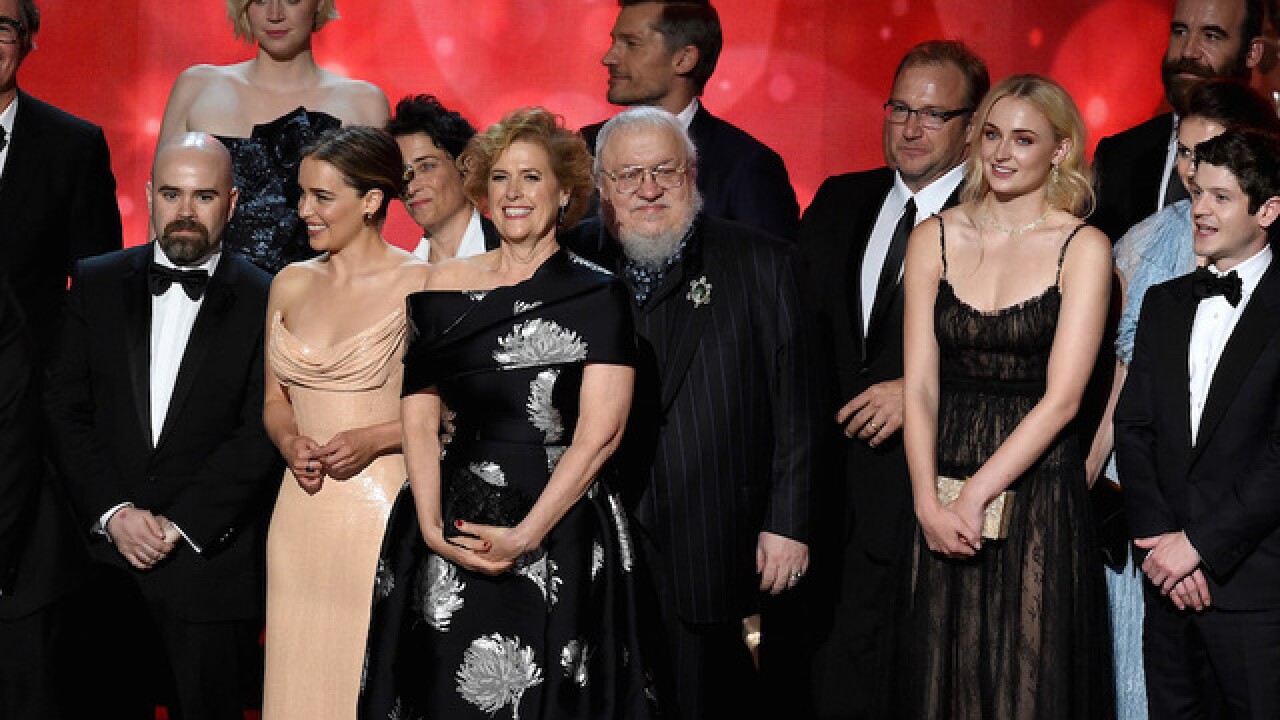 "Game of Thrones" conquered the Emmy kingdom Sunday, honored as top drama for the second consecutive year and becoming the most honored prime-time TV series ever on a night of surprises and sharp political jabs.

But the top drama acting trophies were far from predictable: Rami Malek of "Mr. Robot" and Tatiana Maslany of "Orphan Black" were the winners, both overcoming heavyweight competition.

"Oh, my God. Please tell me you're seeing this too," said a stunned Malek, who plays an emotionally troubled engineer caught up in a dangerous hacking conspiracy.

"Games of Thrones," the fantasy saga based on George R.R. Martin's novels, received a total of 12 awards Sunday and at last weekend's technical arts ceremony for a cumulative 38, besting "Frasier" by one to claim most prime-time series awards ever.

The Emmys proved more adroit than the Oscars at recognizing and honoring diversity in Hollywood's top ranks, with trophies going to minority actors and behind-the-scenes artists including writers Aziz Ansari and Alan Yang of "Master of None."

But Viola Davis of "How to Get Away with Murder" failed to repeat her 2015 best drama actress win, the first for a woman of color.

Tambor, who plays a transgender character on "Transparent," called on Hollywood to make him the last non-transgender actor to get such a role.

A shaking Louis-Dreyfus ended her speech by dedicating the trophy to her father, who she said died Friday. Before that, she honed in on GOP contender Donald Trump's campaign.

"I'd also like to take this opportunity to personally apologize for the current political climate," she said. "I think that 'Veep' has torn down the wall between comedy and politics. Our show started out as a political satire but it now feels more like a sobering documentary."

She promised to "rebuild that wall and make Mexico pay for it."

Her victory gave her six best comedy wins — five for "Veep," one for "The New Adventures of Old Christine" — and broke her tie with Candice Bergen and Mary Tyler Moore.

Maggie Smith was honored as best supporting actress in a drama series for the final season of "Downton Abbey." It was her third win for playing the formidable dowager. As has become her custom, she didn't attend the ceremony. After Smith's win, Kimmel said her Emmy would not be mailed to her but would be kept in the Microsoft Theater's Lost and Found until she shows up to claim it.

Ben Mendelsohn of "Bloodline" won as best supporting drama actor and also was a no-show.

The dramatic retelling of the football star's murder trial was honored as best limited series and writing, and earned awards for stars Courtney B. Vance, Sterling K. Brown and Sarah Paulson.

Paulson, who played prosecutor Marcia Clark, brought her as a guest and singled her out from the stage.

Clark was not the "the two-dimensional cardboard cutout that I saw on the news" but a "whip-smart" woman dedicated to justice for the case's victims, Nicole Brown and Ronald Goldman.

Regina King claimed the award for supporting actress in a limited series for "American Crime," her second trophy for the program.

Louie Anderson was honored as best supporting actor in a comedy series for his portrayal of a loving but tough mom in "Baskets."

"Mom, we did it!," Anderson shouted, hoisting his trophy and dedicating the award to his late mother, Ora Zella Anderson. "I have not always been a good man but I play one hell of a woman."

"Saturday Night Live" cast member Kate McKinnon won the trophy for best supporting actress in a comedy for, officially, playing various characters. But she knew who to credit.

"Thank you, Ellen DeGeneres, thank you, Hillary Clinton," she said, naming two of the famous people she's caricatured on the show.

The Democratic presidential contender responded quickly with a tweet: "Congratulations on your Emmy, Kate! Big fan of yours, too."

The ceremony started out with a political edge. In a video bit, Jimmy Kimmel was shown trying to get to the ceremony and encountering former GOP presidential contender Jeb Bush as a limo driver.

"Did you know you could make $12 an hour working for Uber?" a game Bush said, smiling. He advised Kimmel that "if you run a positive campaign, the voters will ultimately make the right choice"— then told Kimmel curtly it was a joke.

In his opening monologue, the host said he was holding "Celebrity Apprentice" producer Mark Burnett responsible for the "Donald Trump phenomenon."

In an attempt at comedy that fell flat, the ceremony announcer indicated that Bill Cosby would be taking the stage. After an awkward silence, Kimmel said it was a joke — the TV star embroiled in decades-old accusations of sexual assault wasn't invited.

A pair of key changes made by the TV academy may have affected the outcomes in Sunday's 27 categories. It revised how votes are cast and counted, switching from a ranking and points system to letting voters simply check off their top choice. That sharpened the selection process and might have affected past winners who managed to collect enough second-place votes to overcome the competition.

In another revision, this one implemented last year, voting was expanded from blue-ribbon panels to — depending on the award — giving substantially more or all of the academy's 20,000-plus members the chance to vote for finalists.