Trump that: Republican Convention all about Trump 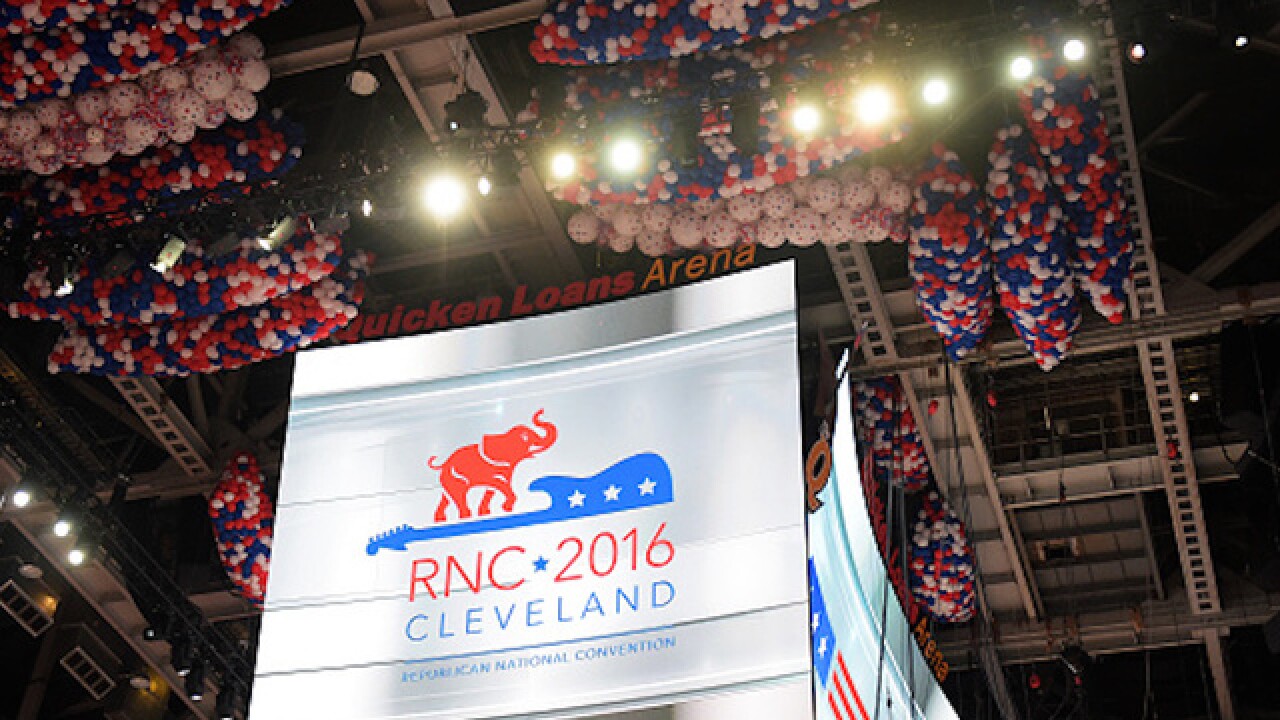 Copyright Getty Images
Jeff Swensen
<p>CLEVELAND, OH - JULY 18: RNC signage and balloons are seen on the first day of the Republican National Convention on July 18, 2016 at the Quicken Loans Arena in Cleveland, Ohio. An estimated 50,000 people are expected in Cleveland, including hundreds of protesters and members of the media. The four-day Republican National Convention kicks off on July 18. (Photo by Jeff Swensen/Getty Images)</p>

Here in Cleveland, the best-kept secret has been something rather extraordinary; the schedule of speakers and event at the Republican National Convention.

Why is that extraordinary? Well at every convention since the invention of the mimeograph, convention maestros distribute minute-by-minute schedule of what will be cooking on the big stages as early as possible. They want journalists to interview and profile the parties’ up and coming stars, elder statesmen and power brokers. They want a highly choreographed theme-party that will echo from the podium through television cameras, laptops, tweets and radio mikes into the hearts and minds of Americans.

The RNC/Trump campaign didn’t bother releasing the coveted schedule until Sunday afternoon, less than 24 hours before the proceedings would begin. Actually, it was not a schedule; it was a list of who would speak each night, with no set order or minute-by-minute script. There were themes:  Make America Safe Again, Make America Work Again, Make America First Again and Make America One Again.

Melania Trump, underwear model and candidate spouse, is slotted under making America Safe Again. Hmmm. I know: She’s going to propose that every white American be given a bulletproof Bentley and 24/7 bodyguards. Duh, problem solved.

Ostensibly this is a political event, but Team Trump is digging deeper into the American psyche and bringing in two stars from one of our most iconic arts: soap operas. Kimberlin Brown from “The Young and the Restless” will be on the big stage. So will Anthony Sabato Jr. from “General Hospital,” presumably talking about health care policy.

Also on the anti-political front, it seems more Trumps and billionaires have primetime speaking slots than senators or governors.

Peter Thiel will speak on the big night before Trump.  He’s the high-tech billionaire who was outed by Gawker and then secretly bankrolled Hulk Hogan’s successful lawsuit against Gawker as revenge and vindication.  A prefect Trumpian role model if there ever was one.

Energy mogul Harold Hamm will be on hand for more inspiration. He’s the guy who had to give his ex-wife $1 billion in alimony. That plus the drop in oil and gas prices reduced his net worth from $19 billion to $11.8 billion according to Forbes. That is exactly the kind of personal hardship Americans deeply relate to.

Trump seems to play Ultimate Fighting Championship in his vision of government, organization, branding and moral uplift. Not only is Dana White, the president of UFC, getting cherished podium pitch, Trump just hired Steven Cheung, the UFC’s spokesman. He’ll be Trump’s director of “rapid response,” which presumably will include spin kicks and rib crushers.

One treat will be an address from 22 year-old Tiffany Trump, the daughter of Trump and Marla Maples, who has been off-stage for the campaign.  Tiffany is developing a career as an independent celebrity, famously as part of a cadre called “The Rich Kids of Instagram.” A Kennedy, a descendant of impressionist Henri Matisse and some lesser-brand zillionaire kin fill out the clique.  Tiffany’s tale of overcoming celebrity and wealth to gain more celebrity and wealth is bound to be heart-warming for all Americans. I know I’m excited.

There is one keynote there, singing in the gold-leaf key of Donald.

“Donald Trump will be Donald Trump. Scripted is the wrong word,” campaign chairman, Paul Manafort, told reporters Sunday. “He will probably be making a couple of appearances.”