The Donald and The Melania play Cleveland 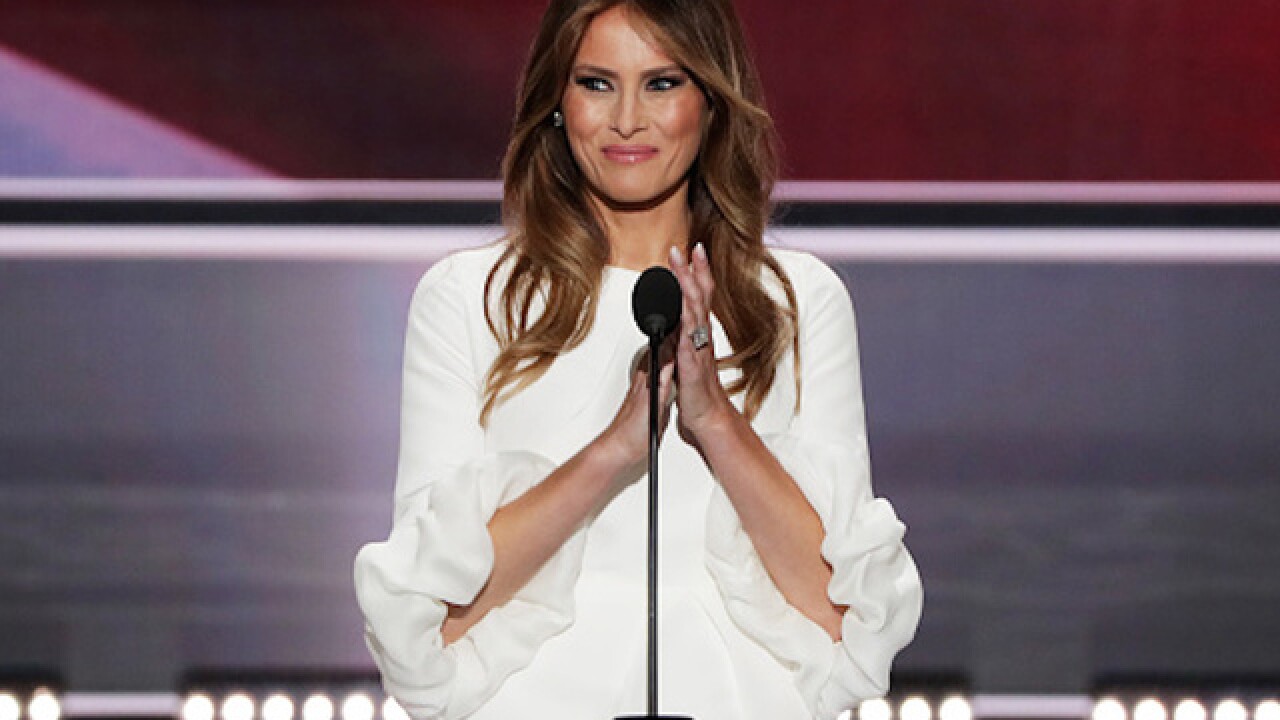 Copyright Getty Images
Alex Wong
<p>CLEVELAND, OH - JULY 18: Melania Trump, wife of Presumptive Republican presidential nominee Donald Trump, delivers a speech on the first day of the Republican National Convention on July 18, 2016 at the Quicken Loans Arena in Cleveland, Ohio. An estimated 50,000 people are expected in Cleveland, including hundreds of protesters and members of the media. The four-day Republican National Convention kicks off on July 18. (Photo by Alex Wong/Getty Images)</p>

A picture may be worth a thousand words, but a Tweet can be worth a whole lot more than 140 characters sometimes. That was surely the case opening night at the Republican National Convention.

Twenty minutes into the primetime program, at 8:21 pm, Donald Trump tweeted out, “Will be on @OreillyFactor tonight at 8:30pm.” Trump actually told his followers to watch his performance on O’Reilly instead of watching the party convention.  Trump stepped on the emotional speech of Pat Smith, whose son was killed in Benghazi in 2012.

Will be on @OreillyFactor tonight at 8:30pm @FoxNews- prior to Melania's speech at the #GOPConvention. Tune in- she will do great! #RNCinCLE

That has to be a first in political history, a triumph of pure ego over premeditated propaganda.

The gaffe sums up the incoherence, confusion and pure Trumpism of Day One in Cleveland.

As the primetime program got rolling after a dinner break, the tumult and excitement of the failed mini-coup had waned, delegates seemed loose and the floor wasn’t especially crowded. There weren’t many celebs to gawk at. Bob Dole sat in the VIP section, barely noticed. Newt Gingrich trundled around the floor, enduring selfie after selfie.

No one was exactly sure about the night’s exact schedule.  When would Melania speak? Was Trump really coming to introduce her?

The theme du jour was supposed to be “Making America Safe Again.”  Speaker after unknown speaker took shots at Hillary Clinton, Barack Obama and the Democrats who have made America so very unsafe.  Despite what Trump promised, it wasn’t much of a production.  “Very unprofessional, not a winner,” Trump might have said.

But in fairness, the crowd seemed genuinely excited to hear from The Donald and The Melania.  After a fractious day, Melania’s job was to soothe a fractured party and paint a cuddly portrait of the nominee.

It’s was a tall order, perhaps more than has been asked of any other potential first lady.  Coincidentally, Gallup released a poll earlier in the day that showed Melania Trump is also the most unpopular candidate spouse since 1992. The poll found 28 percent of Americans viewing her favorably, 32 percent viewing her unfavorably and 40 percent unsure.  She is the only potential first lady that had a net negative rating.

As Rudy Giuliani gave a snarling, rambling attack dog speech, the convention floor started to fill for real. Giuliani wrapped up, the lights dimmed and “We Are The Champions” boomed from the speakers.

Enter Trump, cue applause, but not pandemonium, not a ten-minute ovation.

Mrs. Trump was elegant, poised but didn’t paint a very vivid or personal picture of her husband and family.

“He loves this country just like me,” she said.

“Donald is intensely loyal,” his third wife told the crowd.

“Our country is underperforming and needs new leadership,” showing off her business vocabulary.

“If you want someone to fight for you and your country, I can assure you, he’s your guy,” Melania said to big cheers.

And that was about it, around 12 minutes of boilerplate spouse speech.

Trump came out and the couple took one quick lap around the stage. No ecstatic ovation, no calls for an encore, no plunge into the crowd.

Or very final.  A former general was the next speaker but delegates poured off the arena floor. More speakers, more empty seats.

Melania may have done the job she was asked to do. But Day One at the Republican National Convention was nothing at all like the Donald Trump extravaganza that might have been.