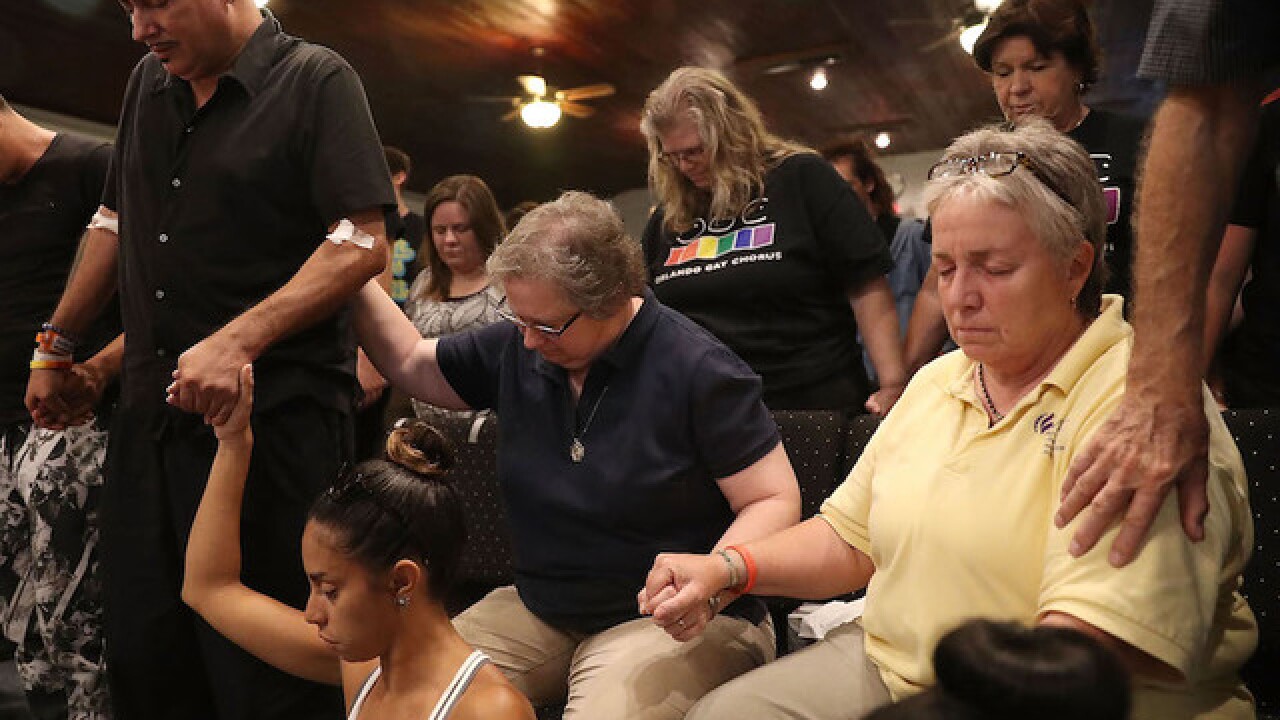 Copyright Getty Images
Joe Raedle
<p>Orlando (did not want to provide his last name) (2nd L) who was injured in the mass shooting at the Pulse Nightclub attends a memorial service at the Joy MCC Church for the victims of the terror attack where Omar Mateen allegedly killed more than 50 people on June 12, 2016 in Orlando, Florida. The mass shooting killed at least 50 people and injuring 53 others in what is the deadliest mass shooting in the country&Otilde;s history. (Photo by Joe Raedle/Getty Images)</p>

Gun violence is America’s own form of state-sanctioned terrorism. Perhaps that sounds incendiary. It’s actually just a bland statement of the obvious.

There are many ways to significantly reduce gun violence, accidental gun deaths and the public safety dangers of firearms. Most every developed country in the world has proven this, and proven that firearms regulation does not constrict democracy and individual freedom.

America has actively chosen to reject such measures and will continue to do so for the foreseeable future. The reason is not practical but purely ideological. Some might prefer the word religious; others might say patriotic or sanctioned by the Constitution.

Whatever the language, the American government and citizenry essentially sanctions and tolerates tens of thousands of deaths a year in the name of a singular belief: the Second Amendment.

How is that not state-sanctioned terrorism?

It is. And we’re good with it, tragically.

Perhaps this sounds cynical. But when it comes to analyzing America’s long and lethal debate about gun violence, there is no difference between realism and cynicism.

The modern debate about gun control is literally a killer argument. The two sides have been locked in an endless death grip. Gun violence goes on and on. That is not going to change for a very long time.

The endless argument adds to the sense of tragedy one feels after a sick crime like the Orlando mass shooting. It also makes the ritualized preaching, posturing and finger-pointing that follows every gun atrocity feel like a completely phony, futile and grotesque charade.

It is. That isn’t being cynical; it’s just stating the obvious.

You will read scores of editorials and political speeches this week saying that maybe after this tragedy – finally – the country will get sane and regulate firearms sensibly. Well, that is not on the visible horizon.

If inclined, you can read scores of editorials and political speeches saying that if more Americans carried guns, Orlando wouldn’t have happened – an armed hero would have shot the bad guy in the nick of time. Remind me, how many times has that happened in real life?

Americans will vote with their credit cards. Gun and ammunition sales will probably go way up this week as they often do after a mass shooting.

Over the next months, some states may pass more open-carry or other pro-gun laws. Others will adopt modest gun control measures. Levels of firearm deaths will remain among the highest in the world.

Gun control advocates will blame the NRA, Second Amendment zealots and the politicians they terrify. It strikes me that the rest of us bear equal blame for not mustering the will, the commitment, the smarts and the funds to win the debate. One side is zealous, the other complacent. These are sins of commission and sins of omission.

Recently, gun violence and the right to bear arms have been tossed into the political cauldron with terrorism. It’s an unfortunate, even tragic, recipe and it is creating horrible confusions, propaganda and fears.

If a crazed mass-murder is Muslim, if he or she utters certain hot-button words, if the murderer’s pathology has religious delusions or manifestations, the atrocity becomes terrorism -- not crime, not murder.

That lets the gun control issue off the hook. The problem isn’t guns and lunatics; it’s ISIS or Osama. It can’t be both; it has to be one or the other. It is better for politicians of all stripes if the atrocity is labeled terrorism.

Our fear of terrorism has been so ginned up, so manipulated that we generally accept any compromise of liberties or convenience and any level of government expenditure to “fight terror.”

We spend billions a year to subsidize the illusion of security that inept airport screening provides – and then we stand in line for it. We give the eavesdroppers and Big Brothers great powers without much fuss. We send young people to wars and battles that do nothing to protect Americans in America – and we sacrifice their lives, hearts and minds.

But don’t touch our guns. That’s a trade off we won’t allow.

For example, after the San Bernadino atrocity, California Senator Dianne Feinstein sponsored what seemed like a sensible piece of law that would prevent any person on the no-fly list to purchase a firearm. The amendment failed. Opponents argued that some people are on the no-fly list list by mistake and compromising their potential right to buy a gun could not be justified by any anti-terrorism benefits.

Still, politicians are eager to declare a mass murder an incident of terrorism instead of a crime whenever possible. Obviously, the recent mass murders committed by radicalized Muslims are not so simple. Terrorism is defined as the organized or systematic use of violence or threatened violence to further a political, ideological or religious cause or to coerce an action. The tragedies in San Bernadino and Orlando have terrorized huge numbers of people, but should they really be classified as terrorism?

If the answer to that is yes, then America’s laws and actions on gun violence constitute state-sanctioned terrorism. The murder of thousands of innocent Americans every year is allowed and tolerated to further a cause – the sanctity of the modern interpretation of the Second Amendment to the Constitution.