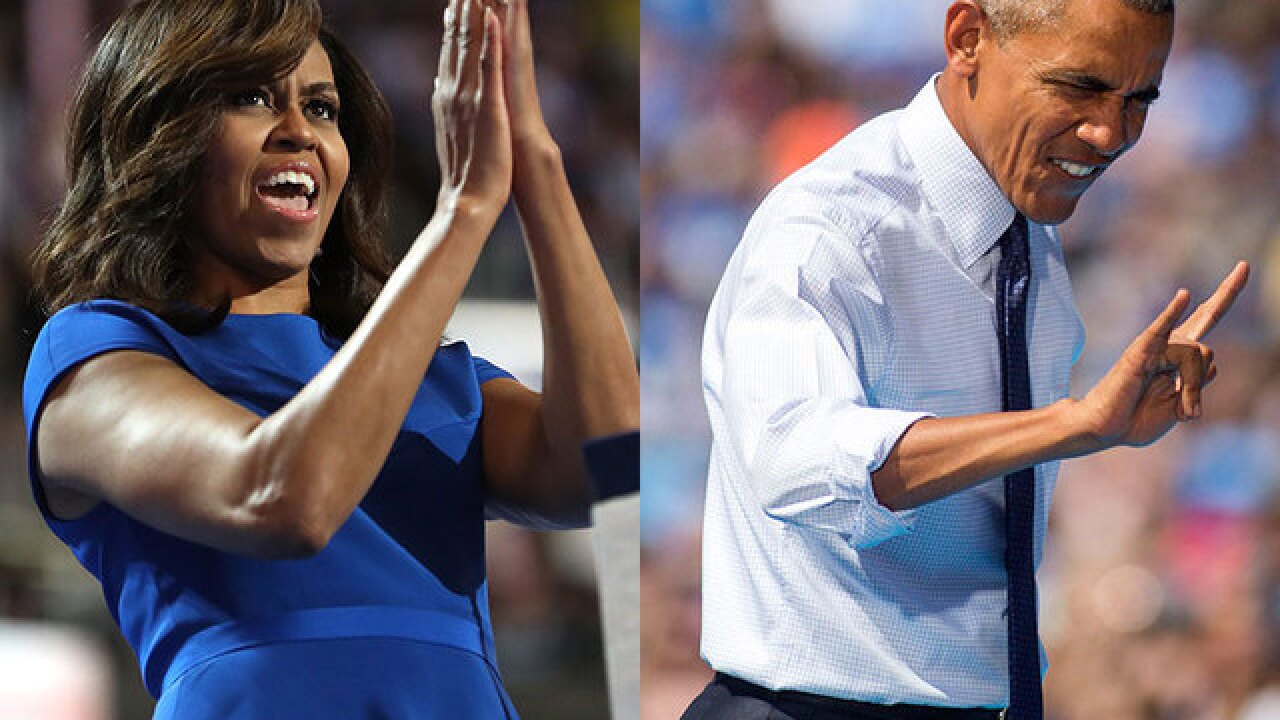 Hillary Clinton is working to reclaim some lost traction in the polls, and she is getting the help of two high-powered, popular surrogates.

At a commuter college only 45 minutes from the White House on Friday afternoon, first lady Michelle Obama extolled Clinton’s virtues to a filled amphitheater of mostly students.

Speaking to loud cheers, the first lady talked about Clinton’s years of commitment beyond the campaign trail, including her dedication to children and women’s issues and her overall vast experience, especially when compared to the Republican nominee, Donald Trump

“She is one of the few people on this entire planet, and clearly the only person in this race, who has any idea what it takes to be president,” Obama said.

Only three days earlier President Obama gave a speech in Philadelphia with a similar message. “I believe there has never been a man or a woman who is more qualified to serve as our president,” he told an enthusiastic youthful crowd.

While a sitting president and first lady campaigning for their replacements might not be novel, Clinton especially has a lot to gain from the partnership.

“President Obama and first lady Obama are the most important and popular black people in the world, so if they are on your side you should want to use them,” said Michael Fauntroy, associate professor of political science at Howard University.

To put it bluntly, the Obamas are really, really well liked right now. The president’s job approval ratings are close to some of their highest levels at 51 percent. Michelle’s favorability ratings are even higher at 64 percent as of early August.

The Obamas’ numbers are striking compared to Clinton’s struggling ratings. The most recent CBS News/NY Times poll found Clinton’s favorability ratings are at 35 percent, with Trump’s not too far off at 33 percent. Those numbers don’t help Clinton much considering recent national polls show Trump pulling ahead of her by a few percentage points.

The Obamas also appeal to key voter demographics. They have historically done well with African American, Latino and younger voters — which are all groups Clinton is courting and, in some cases, struggling to secure.

“I think the president could be pretty effective [as a surrogate],” said Mike Hais, co-author of the book “Millennial Momentum: How a New Generation is Remaking America.”

“Millennials came out in droves in 2008 and there is evidence that the millennial vote was crucial to beating Mitt Romney in 2012,” he said. “And millennials have continued to give (Obama) good ratings even when he got close to 50 percent approval in job performance; millennials always approved of his performances probably by 60 to 65 percent.”

Clinton currently is struggling with young voters. While the majority of Bernie Sanders’ supporters said they would likely support her in the general, there are some questions regarding the number of voters between the ages of 18-35 who actually will show up at the polls and vote.

“Seventy percent of former Bernie Sanders supporters would turn into Hillary Clinton supporters. Many people would say that’s a large number and that’s good enough,” said Kei Kawashima-Ginsberg, director of Tuft’s Center for Information and Research on Civil Learning and Engagement. “But when you think to back in 2008, this is tens of thousands not the hundreds of thousands of people so it’s not really big enough.”

Michelle Obama’s popularity was evident during her speech Friday at George Mason University where she talked at length about Clinton’s qualifications and dedication to the country. She highlighted the former secretary of state’s long emphasis on health care and families.

Clinton’s campaign manager Robby Mook told the Washington Post last Wednesday that he hopes Michelle Obama “will continue to do what she did in her [DNC] speech, which is talk about the important role that the president plays as an advocate for kids and families, and how Hillary is eminently qualified to do that job probably better than anyone else in history.” And David Plouffe, President Obama’s former campaign manager, told Bloomberg News, “I think she can be super effective in suburban areas.”

At the Friday event the first lady specifically pushed the millennial crowd to make sure they vote for Clinton, saying, “If you want to just hide under the bed and come out when it’s all over, I want to remind you what’s at stake.”

While President Obama highlighted accomplishments he shared with his former secretary of state, including their work towards re-opening travel to Cuba, the Iran nuclear deal and international climate agreements, Michelle Obama emphasized Clinton as a highly qualified female.

“I’m inspired by her insistence, her consistency and her guts,” said the first lady. “No one in our lifetime has had as much exposure to the presidency. And yes, she happens to be a woman.”

The first lady also didn’t shy away from criticism of Trump, calling out his latest “birther” turnaround, by saying her husband “goes high when others go low.”

At the GMU rally most attendees donned Clinton campaign apparel but it was the first lady that many of them considered their role model.

“I’m such a huge fan, she’s really inspired me. For minority women like me, I think she sets a really great example,” said Shruti Mallappa an 18-year-old freshman at GMU who attended the rally with her mom. “I just think [Obama and Clinton] have the same basic ideas and morals and I think in that way they are able to work together.”

Mallappa’s mother agreed that Obama was an inspiring female figure but acknowledged that on paper the two female politicians seemed to have very few things in common.

“I just love [Obama], everything she does. I think she’s set a great example for the country and she’s somebody we can look up to,” said Rekha Mallappa, 40. “I think they have the same ideals and want the same things for America but I don’t know if they are really all that similar. I think they complement each other. I think that the people that Hillary Clinton may not appeal to Michelle Obama will.”

One of those people was Brittany Lusker, who came to see Obama speak because she is a diehard fan of the first lady, even though she was still not sold on Clinton.

“I grew up in a bi-cultural family and I know how it is to be discriminated against and she just loves everybody,” said Lusker, 18, of Obama. “I’m kind of on the fence about [Clinton]. I was a Bernie supporter, so I just don’t want Trump to win.”

Mara Barkley also came to the rally to see what Obama had to say about Clinton because she still was unsure of the candidate after having supported Sanders in the primary.

“I’m mostly here for Michelle Obama. She has been really inspirational for me…she sort of inspired me to go into engineering and stuff like that. So to see her take on Hillary’s campaign will be really interesting,” said the 20-year-old student from Colorado. “I think it will be interesting because I look up to Michelle so much that to see what she says about her will make a big difference. It will be nice to get some reinforcement from her.”

While surrogates can only do so much, with the Obamas behind her, Clinton has the chance to gain some ground in the final days of the presidential election —ground polls indicate she has lost in the past couple of weeks.