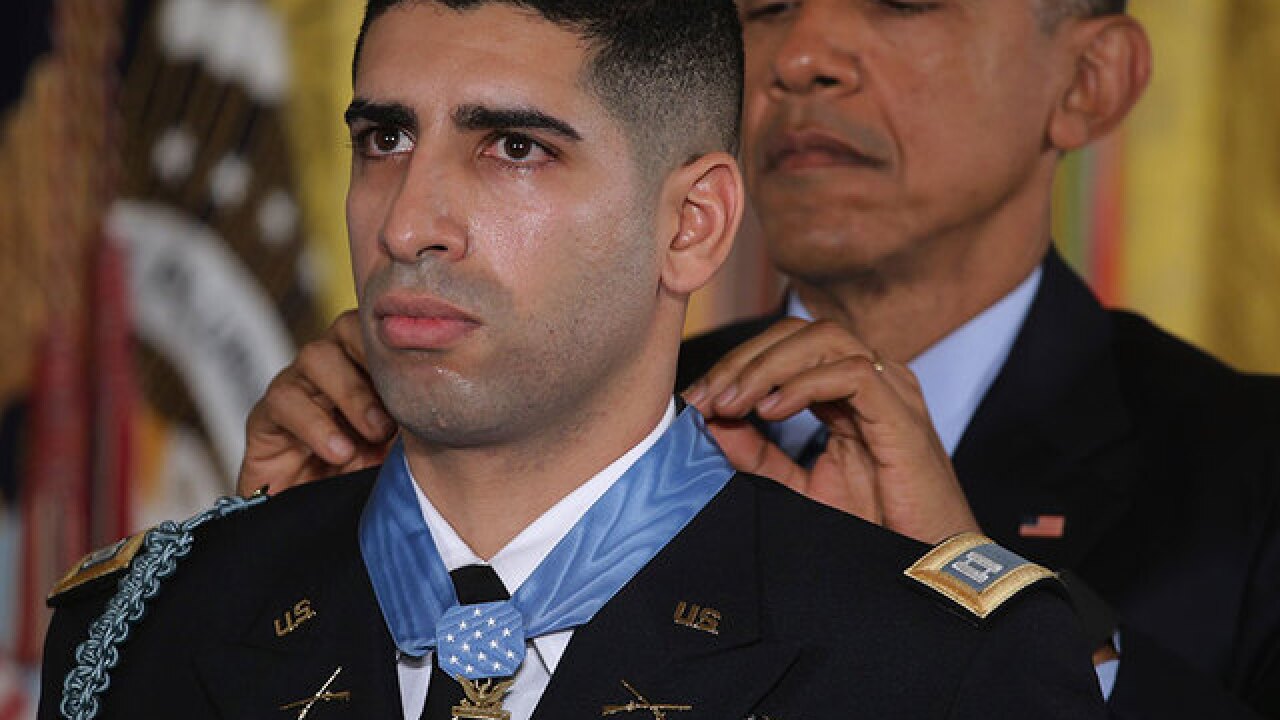 Florent Groberg is a self-described lifelong Republican, but he spoke Thursday evening at the Democratic National Convention.

Groberg, 33, is a former U.S. Army captain who was awarded the Medal of Honor for protecting fellow soldiers from a suicide bomber while serving in Afghanistan. He says he likes guns and a strong military. He also says his dad voted exclusively for Republicans, and he always thought he might do the same -- until Donald Trump became the Republican presidential nominee.

He sat down with DecodeDC before his primetime DNC speech to talk about why he plans to vote Democrat for his first time this November and the frustrations he feels with his generation — Millennials who don’t understand that peace has to come from war.

DecodeDC: What made you decide to speak tonight at the DNC?

Groberg: They actually called me … 10 days ago to see if I’d speak in front of Democrats. I realized it would be a good platform to support veterans. What’s going on right now in my party, we have a little bit of a disconnect in my opinion and I can’t personally follow Trump. I don’t believe in his policies and I don’t believe in the man as a leader. I’m not saying I believe in what Hillary is doing, but I’ve done more research about what she’s doing for veterans and to me that was the tipping point.

DecodeDC: What do you think of Hillary as a commander in chief vs. Trump. He claims he’s going to make the military safer and stronger. You obviously have experience in the military, do you think that’s true?

Hillary Clinton — for all of her faults that people claim she has — she has 40 years of experience in the political arena. She was the first lady, her husband was the president and she was also in charge of the State Department. So her coming in as commander in chief, this is not a grandiose new avenue that is putting the lives of millions of service members on the line or jeopardizing national security because she has no experience. She has experience.

DecodeDC: Do you get any push back from your friends or colleagues for being here? Obviously Benghazi is something that is often brought up to prove that Clinton is an incompetent presidential nominee.

Groberg: I like to ask people, have you read the classified files? Until you’ve read the classified files, it’s hard to put the blame on one person. I’m not (an) expert on what happened. But to me it’s a really sensitive argument because you’re talking about families that lost individuals, and I’m pretty sure the ambassador’s family is actually supporting Clinton and they are not blaming her for that situation.

Her record has been pretty good. The whole email (issue) doesn’t help, and I don’t understand how that happened and I agree that she should be held accountable. I do not believe that she should go to jail. [She] should have had a slap on the hand and I think she did. The FBI found nothing, right?

DecodeDC: What do you think people will say about your speech?

Groberg: People might get angry at the fact that I’m here doing this and I don’t really care. But that’s our given right as Americans: freedom of speech. I think that’s the greatest thing that you could possibly have. I think that people need to calm down at times and step back and realize how lucky we are to have that. Many, many, many other countries where you speak your mind and fight on certain politics will put you in jail and in extreme instances you could lose your life for it. And I hate to see people burning the flag, I just don’t get it, or fight with our police officers, and the Bernie groups. I just don’t get it. But that’s why we are the greatest country in the world. It’s what I 100 percent believe, and some of our Republican leadership tends to say we aren’t anymore which bothers me.

DecodeDC: Is that personal to you? You obviously fought for this country, to keep it great.

Groberg: When I hear comments that our military is weak, I’m like, ‘Are you kidding?’ We are the strongest military in the world. Do you know why? Because we have the best people. We have a heck of a lot of experience, our technology is outstanding but we have the greatest leaders. I understand what [Trump’s] trying to say by weak, but the guy doesn’t say it right. When you say our military is weak, that actually motivates enemies. When you say ISIL is winning, that’s crap. That’s absolute crap.

DecodeDC: Former CIA Director and Secretary of Defense Leon Panetta spoke last night at the DNC and received some heckling from protesters who are anti-war. Many of those protesters are of our generation— they are Millennials — what were your thoughts on seeing them respond to him that way?

Groberg: Laughable. Sad. Disrespectful. Misguided. Inexperienced. But again Americans have the right to do that. … Nobody is pro-war. Sometimes there’s just no other solution. You think you can sit at the table with people like ISIL and talk to them? No, that’s not possible. I don’t think anybody who takes the office of president wants to send our nation’s youth and citizens into a foreign zone to go fight. No. I’m pretty sure that Clinton and Obama did everything to bring our troops back from Iraq and Afghanistan, which by the way, I don’t agree with.

The Bernie crowd, these young kids, they’ve never been put in a decision, the 99 percent of them, where the consequences could be life or death, where your family members are not going to come home. They have never been in a situation where your uncle gets killed, beheaded and chopped into pieces, like I have, from a terrorist organization. They live in a world where they believe that peace is a real thing. And I wish it were. I really, really wish it were. But all you have to do is look at history. We have been at war in some fashion forever. It’s almost human nature. I want to live my life in peace, but right now we have a mission and I do not believe that Clinton has ever mentioned that she is going to take our troops back overseas to fight more wars.