Watch and Win: how to win a pair of tickets to the KISS show on February 5 at KeyBank Center 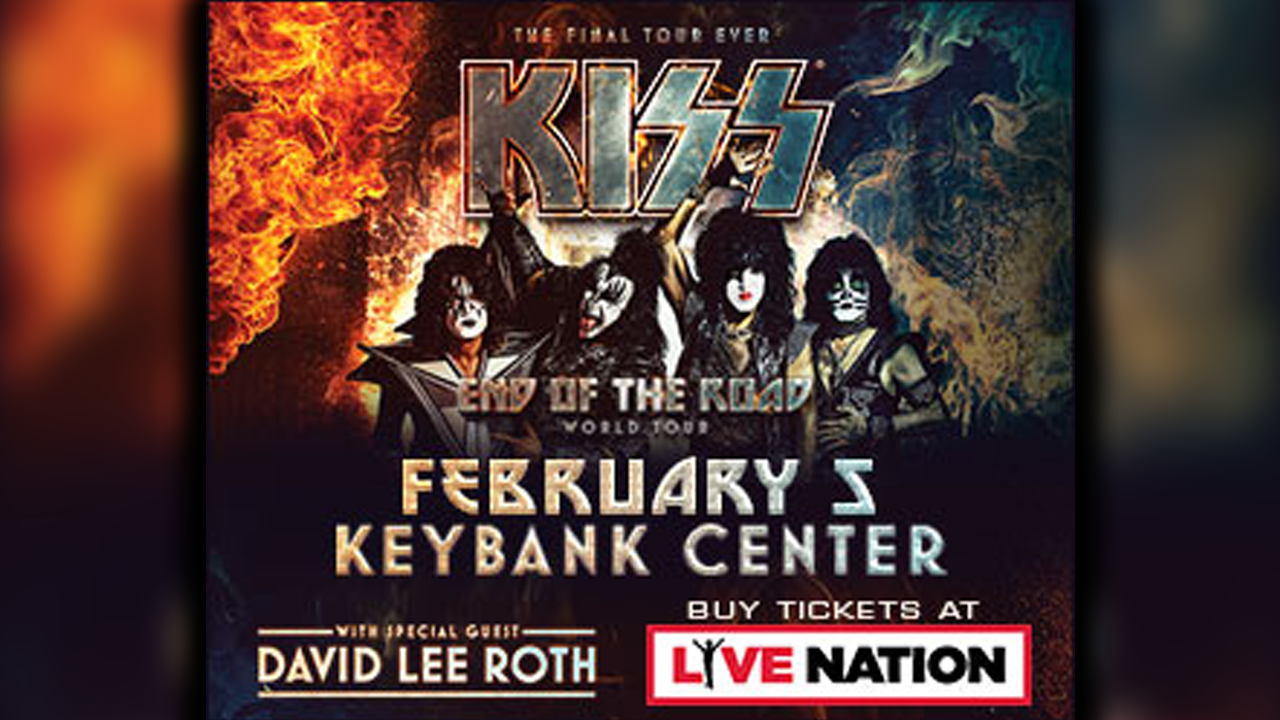 Watch AM Buffalo on Thursday, January 30 and Friday, January 31 for your chance to win two tickets to the KISS concert on February 5 at KeyBank Center.

On Thursday and Friday during AM Buffalo, which airs 10 a.m. to 10:30 a.m., host Linda Pellegrino will prompt viewers to call in for their chance to win a pair of tickets. The seventh caller at (716) 644-9840 will win a pair of tickets to the concert, sponsored by Live Nation.

Please refer to the rules below for more information.

NO PURCHASE NECESSARY TO ENTER OR WIN. A PURCHASE WILL NOT INCREASE YOUR CHANCES OF WINNING.

The LIVE NATION/KISS WATCH AND WIN Sweepstakes (“Sweepstakes”) begins on 1/30/2020 and ends on 1/31/2020 during the dates and times listed in the TO ENTER section below. The time will be determined by Sponsor’s timekeeping systems. Sponsor will have the sole discretion in determining the timeliness of any action or inaction related to this Sweepstakes. All times mentioned in these Official Rules are Eastern Time (“ET”) unless expressly noted otherwise.

Open only to legal U.S. residents who are at least 18 years of age or the age of majority in their state of residence, whichever is older, as of date of entry and reside in New York and Pennsylvania in the following counties: Erie, Niagara, Orleans, Genesee, Wyoming, Chautauqua, Cattaraugus, Allegany, McKeon and Potter. Void wherever prohibited by law and outside the listed counties. Employees of Scripps Media, Inc. d/b/a WKBW-TV, Live Nation (collectively, “Sponsor”), their respective parents, affiliates, subsidiaries, advertising and promotion agencies, prize suppliers, including any vendors providing services in connection with this Sweepstakes (collectively, the “Sponsor Affiliates”) and the immediate family members (spouse, mother, father, in-laws, grandmother, grandfather, brother, sister, children and grandchildren) and/or those living in the same household of any of the foregoing individuals are not eligible. By participating, entrants agree to be bound by the Official Rules and the decisions of Sponsor.

No mechanically reproduced entries of any kind permitted. Illegible and incomplete entries are void. Sponsor is not responsible for interrupted, distorted, or incorrect broadcast information; dropped calls; lost, late, misdirected entries; or entries not received for any reason. Received entries become the property of Sponsor and will not be returned. The timing of the Show is subject to change depending on programming conflicts, breaking news or other circumstances out of Sponsor’s control. If this happens, the Sweepstakes will occur during the next possible Show.For those viewing/listening to the station stream on the Internet or other non-broadcast means: Please be advised that you may be listening to a delayed stream of the broadcast signal, which may vary depending on your computer’s memory capacity and your dial-up connection. For that reason, we strongly recommend that you turn on your television to the station to participate in this or any other call-in promotion to be sure you are participating in “real time.” Sponsor assumes no responsibility for contestants not making timely phone calls to the call-in number as a result of the delays in the method of viewing/listening. WINNER SELECTION: Winners will be selected by viewer’s caller number based on random answering of the telephone when the prompt to call in to win is given. Decisions of Sponsor are final on all matters. Limit one prize per person/household address. Odds of winning will depend upon the number/order of callers.

WINNER NOTIFICATION AND RELEASES: If a potential winner: (a) is not in compliance with these Official Rules, (b) does not meet the eligibility requirements, (c) declines the prize, or (d) does not sign and return required documents or provide required identification by deadlines established by Sponsor, he or she will be disqualified. Each potential winner may be required, in Sponsor’s sole discretion, to complete and return an Affidavit of Eligibility & Liability/Publicity Release (TN residents need not sign Publicity Release) and a scan or photo of legal ID and also to have any companion(s) who will participate in the prize activities, if applicable, return the same documentation before claiming the prize or being allowed to participate in any prize activities. If any of the potential winner or the companion(s), if applicable, is under the age of majority in his or her state of residence, then the parent or legal guardian of the minor potential winner or companion(s) must sign and return all required forms. All forms must be postmarked within 10 days of the date on notification materials if return is requested via mail or forms must be completed before receipt of any prize if prizes are picked up in person.

Prizes consist of only those items specifically listed as part of the prize. Sponsor reserves the right to substitute any prize with prize of equal or greater value in its sole discretion. No substitution or transfer/assignment of prize by winners permitted. Subject to all terms, conditions and restrictions on face of tickets or imposed by issuer. If by reason of printing or other error, more prizes are claimed than the number of prizes set forth in these Official Rules, a random drawing will be held to award the advertised number of prizes in the relevant category. All properly claimed prizes will be awarded, but under no circumstances will more than the advertised number of prizes be awarded. Prizes are awarded “AS IS.” Winner must pick up his or her prize at WKBW, 7 Broadcast Plaza, Buffalo, NY 14202 M-F between 9AM-5PM no later than 2/5/2020.

Federal, state, and local taxes on prizes, if any, and any other costs, fees and expenses not listed above as specifically included as part of the prize are the sole responsibility of winner. An IRS form 1099 and other tax-related forms and documents may be issued by Sponsor if required by law.

PUBLICITY AND MARKETING: Submission of an entry in the Sweepstakes constitutes permission to the Sponsor to use entrant’s name, identity, title, likeness, distinctive appearance, physical likeness, image, portrait, picture, photograph (whether still or moving), screen persona, voice, vocal style, statements, gesture, mannerism, personality, performance characteristic, biographical data, signature, social media handles and identities, and any other indicia or imitation of identity or likeness for purposes of advertising and trade, in any medium, without further notice, approval, or compensation, unless prohibited by law.

LIABILITY RELEASE & INDEMNIFICATION: By entering this Sweepstakes, you agree to release, discharge and hold harmless Sponsor, Sponsor Affiliates and their respective parents, affiliates, and subsidiaries and all of their directors, officers, employees, agents and assigns (the “Released Parties”) from any claims, losses, and damages arising out of, or relating to, your participation in this Sweepstakes or any Sweepstakes-related activities (including, without limitation, any event attended as part of a prize) and the acceptance and use, misuse, or possession of any prize awarded hereunder (including, without limitation, any misrepresentation made by the entrant in connection with the Sweepstakes; any non-compliance by the entrant with these Official Rules; claims brought by persons or entities other than the parties to these Official Rules arising from or related to the entrant’s involvement with the Sweepstakes; acceptance, possession, misuse or use of any prize or participation in any Sweepstakes-related activity or participation in this Sweepstakes; any malfunction, error or other problem arising in connection with the collection, processing, or retention of entry information; or any typographical or other error in the printing, offering or announcement of any prize or winner). The foregoing includes, without limitation, any claim for personal injury, property loss or damage, or death arising in any way in connection with the Sweepstakes.

OTHER TERMS: Sponsor not responsible for any typographical or other error in the printing, the offering or the announcement of any prize or in the administration of the Sweepstakes, whether caused by computer, technical or human error. Sponsor is not responsible for late, lost, damaged, incomplete, illegible, faulty, or incorrect transmissions, incorrect announcements of any kind, technical hardware or software failures of any kind, lost or unavailable network connections, or failed, incomplete, garbled or delayed computer transmission that may limit a user’s ability to participate in the Sweepstakes whether caused by computer, technical or human error. Sponsor reserves the right to modify the Sweepstakes or any portion of it for any reason, including but not limited to, if fraud, misconduct or technical failures destroy the integrity of the Sweepstakes; or if a computer virus, bug, wireless failure, or other technical problem corrupts the administration, security, or proper administration of the Sweepstakes as determined by Sponsor, in its sole discretion. Sponsor reserves the right to disqualify, freeze or prohibit the participation of an individual if fraud or tampering is suspected, or if the individual fails to comply with any requirement of participation or with any provision in these Official Rules. Sponsor reserves the right to disqualify any individual from further participation in the Sweepstakes if Sponsor concludes, in its sole discretion, that such person: (a) has attempted to tamper with the entry process or other operation of the Sweepstakes; (b) has disregarded or has attempted to circumvent these Official Rules; (c) has committed fraud or attempted to undermine the legitimate operation of the Sweepstakes; or (d) has acted toward Sponsor, any Sponsor Affiliates, or any other entrant in an unfair, inequitable, annoying, threatening, disrupting or harassing manner. If a dispute arises regarding compliance with these Official Rules, Sponsor may consider, in its sole discretion, data reasonably available to Sponsor through information technology systems in Sponsor’s control, but Sponsor will not be obligated to consider any data or other information collected from any other source. Any attempt to undermine the operation of this Sweepstakes may be a violation of criminal and civil laws. Sponsor reserves the right to disqualify and/or seek damages from any individual making any such attempts to the full extent permitted by law. Any failure by Sponsor to enforce any of these Official Rules will not constitute a waiver of such Official Rules. If there is a conflict between any term of the Official Rules and any marketing or entry materials used in connection with the Sweepstakes, the terms of these Official Rules will govern.

GOVERNING LAW & JURISDICTION: EXCEPT WHERE PROHIBITED, ENTRANTS AGREE THAT ANY AND ALL DISPUTES, CLAIMS AND CAUSES OF ACTION ARISING OUT OF OR CONNECTED WITH THIS SWEEPSTAKES, OR PRIZE AWARDED, WILL BE RESOLVED INDIVIDUALLY WITHOUT RESORT TO ANY FORM OF CLASS ACTION, AND ANY AND ALL CLAIMS, JUDGMENTS AND AWARDS WILL BE LIMITED TO ACTUAL OUT-OF-POCKET COSTS INCURRED BY ENTRANT WITH REGARD TO THIS SWEEPSTAKES, BUT IN NO EVENT ATTORNEYS’ FEES, PUNITIVE, INCIDENTAL, CONSEQUENTIAL OR OTHER DAMAGES. All issues and questions concerning the construction, validity, interpretation and enforceability of these Official Rules, or the rights and obligations of entrants and Sponsor in connection with the Sweepstakes will be governed by and construed in accordance with the laws of the State of Ohio, without giving effect to any choice of law or conflict of law rules or provisions (whether of Ohio or any other jurisdiction) that would cause the application of the laws of any jurisdiction other than Ohio. The state and federal courts located in Hamilton County, Ohio will be the exclusive forum for any dispute relating to these Official Rules and/or this Sweepstakes. All participants and winners agree, by their participation in the Sweepstakes, to submit to the personal jurisdiction of the state and federal courts in Hamilton County, Ohio and waive the right to contest jurisdiction.

SEVERABILITY: If any provision(s) of these Official Rules are held to be invalid or unenforceable, all remaining provisions hereof will remain in full force and effect.