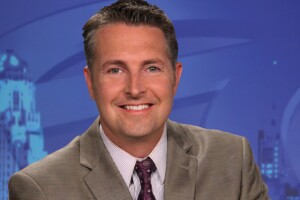 Aaron is an adjunct professor of meteorology at Jamestown Community College and Buffalo State College. He also serves as a forensic meteorologist for various law firms. Aaron is honored to have been inducted into the North Tonawanda High School Wall of Fame in 2006. He was also nominated for Best Local Weatherman in Buffalo’s Art Voice magazine. He was featured on "LIVE with Regis and Kelly" in January 2009, chatting about the snow in Buffalo. Aaron also forecasts the weather live every afternoon for WJYE 96.1FM and WYRK 106.5FM.

The Lockport native grew up in North Tonawanda and, for as long as he can remember, has been fascinated with weather. Growing up in Western New York meant he saw his share of snow storms - and his passion for weather prompted him to pursue a career in meteorology. After graduating from North Tonawanda High School, he attended the University of Buffalo and went on to SUNY Oswego, where he studied Lake Effect Snow patterns and earned a BS in Meteorology.

Prior to returning to Buffalo, Aaron gained broadcast experience in Macon, Georgia, and Fort Myers, Florida. He has also forecast weather conditions for ski resorts and radio stations in North America.

In his spare time Aaron enjoys playing soccer and ice hockey, and is a First Degree Black Belt in Kenpo Karate. Aaron and his wife Sharon are the proud parents of three young boys.