“I believe we are in compliance" 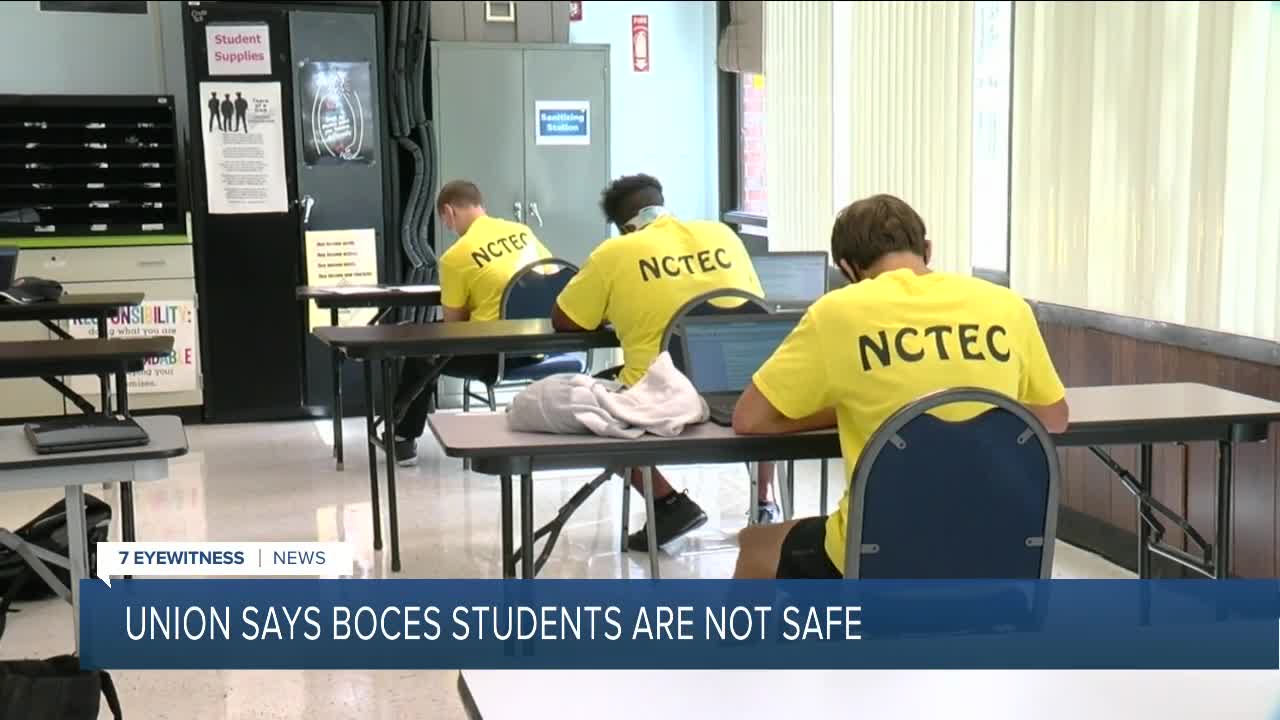 SANBORN, NY (WKBW) — Members of the state teachers union have filed a complaint against the Orleans Niagara BOCES saying the reopening plan is not keeping students and teachers safe at some of its teaching sites.

The union says there is “widespread non-compliance” in the Orleans Niagara BOCES’s reopening plan.

Thursday, we visited one of the buildings and found students in a security and law enforcement class at the Niagara Career and Technical Education Center in Sanborn, were seated six feet apart wearing face masks.

The union is crying foul over the reopening plan saying students are not being protected against COVID.

The union's complaint accuses the Orleans Niagara BOCES states "the recognized hazards range from improper physical distancing of students and staff, lack of and/or improper face coverings, failure to clean and disinfect high touch areas, the failure to conduct mandatory screenings and PPE shortages, to name just a few."

“There's been no change in the student population coming in to accommodate the safety needs that need to be taken care of — in terms of spacing and social distancing,” Hillburn stated.

We took the union complaints directly to the superintendent, who met us at the Niagara Career and Technical Education Center.

“I believe we are in compliance,” Godshall explained.

Godshall oversees the Orleans Niagara BOCES district that stretches across 13-school districts, the third largest career and tech center in the state.

“I think people are somewhat upset that we were open full time with 13 different schedules — we had to be open,” Godshall responded.

“Our special ed students at those sites are students that really have a hard time staying put. In our opinion, these are the kids that should have been given more square footage, so they could be safe from each other because they are medically at risk,” Hillburn said.

The union also claims teachers were warned of limits of PPE, but the superintendent says they have plenty.

Godshall said what they have not been able to purchase is Clorox brand wipes, but he said they are using another brand.

But the leader did admit that his BOCES district is low on gowns used for the nursing program at some of his sites.

“A couple of buildings are down to five or six gowns and we’re going to go out and immediately buy those,” Godshall said.

There are camera temperature checks set up inside the entrance to the career tech building where about 1,710 students enter.

“We have isolation rooms — we have RN’s ‘at all of our sites,” Godshall noted.

The union leader said they were left out of the full planning of the reopening plan.

“We only received an email asking for our input to me that is not engagement,” Hillburn explained.

But the superintendent said he would be happy to meet with members.

"I’ll drive down. I’ll meet with whoever. I have ample administration staff that can respond and we’ve got a ton of equipment,” Godshall responded.

The superintendent says he has more than 700-staffers and has not received a "single complaint."

But the union leader said she has been conducting a membership vote of “no confidence” of the superintendent.

Hillburn said as of Thursday 87-percent have "no-confidence" in his leadership.

NYSUT said the Department of Labor now has 48 hours to respond to the complaint and hopes it would force BOCES to comply with the reopening plan they originally submitted to the state.