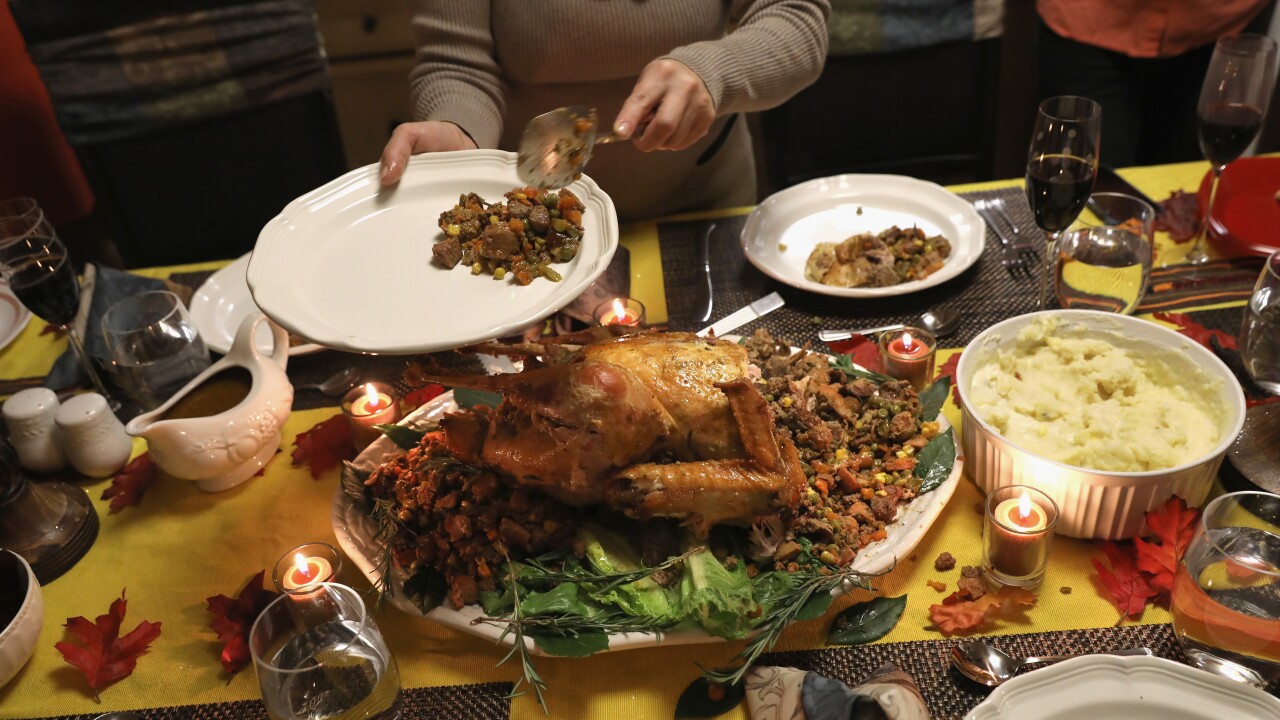 John Moore/Getty Images
STAMFORD, CT - NOVEMBER 24: A Guatemalan immigrant serves stuffing from the Thanksgiving turkey on November 24, 2016 in Stamford, Connecticut. Family and friends, some of them U.S. citizens, others on work visas and some undocumented immigrants came together in an apartment to celebrate the American holiday with turkey and Latin American dishes. They expressed concern with the results of the U.S. Presidential election of president-elect Donald Trump, some saying their U.S.-born children fear the possibilty their parents will be deported after Trump's inauguration. (Photo by John Moore/Getty Images)

BUFFALO, N.Y. (WKBW) — With Thanksgiving looking different this year due to the pandemic, the cost of your Thanksgiving meal will be different from last year as well.

According to a new survey from the New York Farm Bureau, the cost of your Thanksgiving dinner has increased by six percent from 2019.

The average total price of your Thanksgiving dinner in New York State, including a 16-pound turkey and traditional Thanksgiving items is $49.23, which is $2.86 more from last year.

According to the survey, turkey prices are up to $1.41 per pound in New York State, which is up 11 percent from last year.

Average turkey prices in New York State range from as low as $.68 per pound to $1.69 per pound.

The New York State average is also above the national average, which is $1.21 per pound.

The survey also found that the prices for whipping cream and a carrot/celery veggie tray actually decreased from 2019.

Other items which saw increases include a four-pound ham, five-pound bag of russet potatoes and a package of frozen green beans.

“It has been a challenging year for every New Yorker, but farmers haven’t stopped doing what we do best, growing quality, nutritious food. Market disruptions have affected some prices, but overall, our volunteer shoppers found the traditional dinner remains affordable for many shoppers,” said Darleen Krisher-Meehan, chair of New York Farm Bureau’s Promotion and Education Committee. “While the holiday season may look a little different this year, we should all give thanks that our food supply remains strong and stable thanks to our farmers and employees who have proven to be essential workers in 2020.”

You can read more about the survey by clicking here.