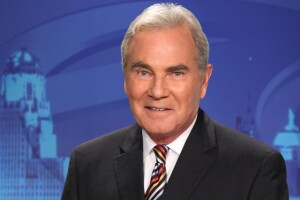 He joined the Eyewitness News team in 1987 and he has anchored a combination of our broadcasts ever since. He is now the longest-running TV Anchorman in Buffalo. Keith came to Buffalo after 5 years at KUTV-TV, the NBC station in Salt Lake City, Utah.

Before that Keith worked as an Anchor/Reporter at CTV in Toronto and CKVR-TV in Barrie, Ontario. Before moving over to television news, Keith worked in radio for 11 years, anchoring and reporting at stations in Windsor/Detroit, Ottawa, and Toronto. Keith is the former news director of the famous CKLW radio station in the Windsor/Detroit market.

Along with anchoring duties, Keith has won numerous awards for his extensive reporting in his 30 years here. He spent a week at Marine boot-camp in South Carolina, profiled Western New York seamen on board a navy frigate in the Atlantic, and traveled to Middle East with local air force reservists to cover the Persian Gulf War in 1990. To cover Hurricane Andrew in Florida, Keith flew with the U.S. Air Force Reserves Team, the Niagara Falls 914th. Keith was also the primary live reporter for ABC News, for the first two weeks of the O.J. Simpson double murder story in Los Angeles. He's profiled such personalities as Peter Jennings, Ted Koppel, Tony Bennett and Regis Philbin. Besides covering most of the national political conventions since 1988, Keith traveled with the Buffalo Bills during the glory years and their four consecutive super bowls. After the Crash of Flight 3407, Keith traveled with the victim's families to Washington, DC as they pushed for a change in legislation for stricter rules for airlines.

A native of Detroit's neighboring Canadian city of Windsor, Ontario, Keith attended The University of Detroit and majored in radio and television journalism. He became a U.S. citizen in 1989 and now lives in the Village of Lewiston, New York with his wife and Frankie, the famous Yorkie.