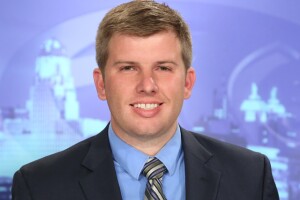 Before calling Buffalo home, Jeff Rusack lived all over the place.

A native Rhode Islander, Jeff longs for large bodies of waters and the Great Lakes are certainly great enough for him. In the summertime you can find him exploring any and every waterway on his kayak.

Jeff earned his bachelor’s degree in Television Studies from Lyndon State College. LSC is located in the Northeast Kingdom of Vermont. That’s where Jeff learned to love skiing and the winter.

From one cold location, Jeff moved to another, a Dakota, South Dakota to be precise. There he learned to love minus fifty degree wind chills and corn, lots and lots of corn. Working for KDLT in Sioux Falls, Jeff covered floods, droughts and routinely covered the spread of the invasive species, Asian Carp.

Sticking to the brutal winters routine, Jeff thought it would be a good idea to move to western New York, not the Nickel City though. For two years he worked at WROC in Rochester, NY.