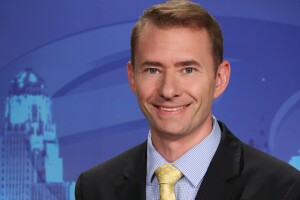 Andy Parker is the Meteorologist for 7 Eyewitness News at 5, 6 and 11 p.m. and Director of Meteorology at WKBW-TV.

Andy Parker returned to 7 Eyewitness News in August 2014. He is the Director of Meteorology and Executive Producer/Weather. In addition to his responsibilities as meteorologist during the station’s morning newscast, Parker continues his trademarked Weather Machine program in the Buffalo area. The school program is dedicated to educating students on the importance of weather and the changing conditions that affect all aspects of life in Western New York.

Parker began his career at WKBW in 1993 and worked alongside the venerable 7 Eyewitness News weatherman Tom Jolls until 2000. Parker holds a Bachelor of Science degree in meteorology with specialties in math and atmospheric physics from the State University of New York at Brockport. Throughout his career, he has earned numerous credits, including the prestigious Edward R. Murrow Award and the internationally respected broadcasting Seal of Approval from the American Meteorological Society.

Andy grew up in the Southtowns and knows how the lake effect storms can change in an instant and helps our viewers plan their day around the changes in Buffalo weather.

When not forecasting the weather, Parker spends time with his wife and daughter.